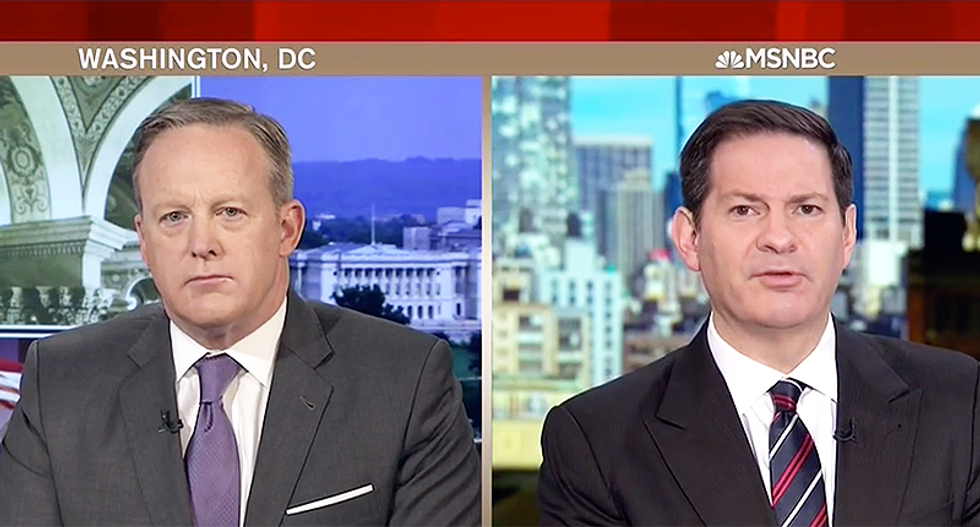 In a Monday interview with "Morning Joe," Donald Trump's press secretary tap-danced around the justifications for the administration's latest Muslim ban, Steve Bannon's elevation to the National Security Council and the reported demotion of key members on the council.

Spicer explained that the administration took language from previous acts set in place directly following the terrorist attacks on 9/11. The registry that was put in place by then-President George W. Bush was ultimately disbanded after having been found to be ineffective and causing additional ethical and international concerns. Spicer again blamed former President Barack Obama for flagging countries on the list. Obama, however, never banned anyone from coming into the U.S. from those countries; he only limited visa-waiver travel from the 7 nations.

Spicer also justified the elevation of Steve Bannon to the National Security Council by claiming that both Karl Rove (under Bush) and David Axelrod (under Obama) also attended meetings. An NPR report disputed the point, saying that Axelrod "never sat in on Principals meetings" nor was he a permanent member as Bannon will be. Washington Post columnist David Ignatius cited Bush's Attorney General Alberto Gonzales, who said that the Rove and others in similar positions should not be allowed to serve in that capacity.

Spicer argued that Rove is no Bannon and that Trump's senior advisor has extensive experience in military and geopolitical affairs. The concern from the panel, however, was not just that Bannon was elevated but that members of the NSC were "downgraded" and brought to Bannon's level. According to the New York Times, the chairman of the Joint Chiefs of Staff and the director of national intelligence will now only attend meetings when necessary.

Morning Joe regular Mark Halperin wondered if Trump's ban will impact relationships with countries like Pakistan and countries like Iraq, who are playing an important role in fighting the war on terrorism against ISIS and other movements that seek to harm the United States. Spicer, however, insisted that Trump made calls all weekend to Muslim nations to try and smooth over the ban. Iraq's parliament responded by urging retaliation against the U.S. for the ban.

Spicer also explained that causing rifts in relationships with strategic allies was not a concern in making this ban because Trump wants to "make America safe again." He also cited statistics, that Trump later tweeted, about a mere 109 people "inconvenienced" by the order. Those 109 people were allowed back into the United States while many other refugees and travelers were put on planes back to their countries.

The panel cited reports surfacing from Department of Homeland Security and State Department officials who revealed that the order was not properly vetted, which Spicer dismissed as coming from low-level people in the Department and that anyone who matters was told. Key Senate Republicans echoed that sentiment over the weekend, saying that they too were not informed on the order. The reason others were not consulted, Spicer claimed, was to protect national security.

You can watch a clip below: