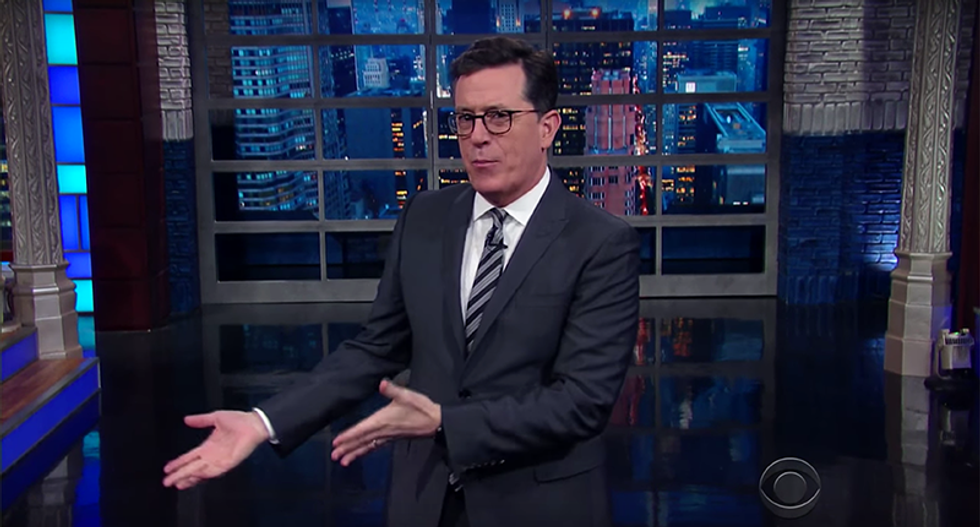 Stephen Colbert hilariously mocked Donald Trump on "The Late Show" last night for a recent interview in which the president-elect confessed that he won't actually be working on "day one." Trump has previously made a lot of promises about what he'll do on his first day in office.

"One of the first orders I'm gonna sign — day one — which I will consider to be Monday as opposed to Friday or Saturday. Right? I mean my day one is gonna be Monday because I don't want to be signing and getting it mixed up with lots of celebration," Trump told the London Times.

Colbert said that he was confused and asked how one mixes up "signing with celebrating."

"I'm sorry, I thought I was signing an autograph, instead, I accidently gave back the Louisiana Purchase," Colbert said while doing a Trump impression.

He went on to say that he was shocked that Trump thinks the president gets Saturdays and Sundays off like it is a normal job.

"Instead of 'Hail to the Chief' it's going to be 'Everybody's Workin' for the Weekend,'" Colbert joked.

Given Trump's low poll numbers, Colbert suggested Trump consider working on the weekends so they might go up.

"When Trump saw these dismal poll numbers, he realized that you can't please everybody and he's got to work for the American people," Colbert said. He then paused as the audience began to laugh. "I'm just f*ckin with ya. He, of course, fired back on Twitter ... apparently, any bad news for Trump is 'rigged.' If it rains on Election Day, he'll tweet, 'Fake weather. Clouds are rigged. Apologize!'"

Colbert also noted that even white nationalists are starting to worry about Trump's ability to do his job. Richard Spencer was quoted saying that he fears Trump will ignore big issues like immigration and get caught up on little things like railing against someone on Twitter.

Check out the full hilarity below: