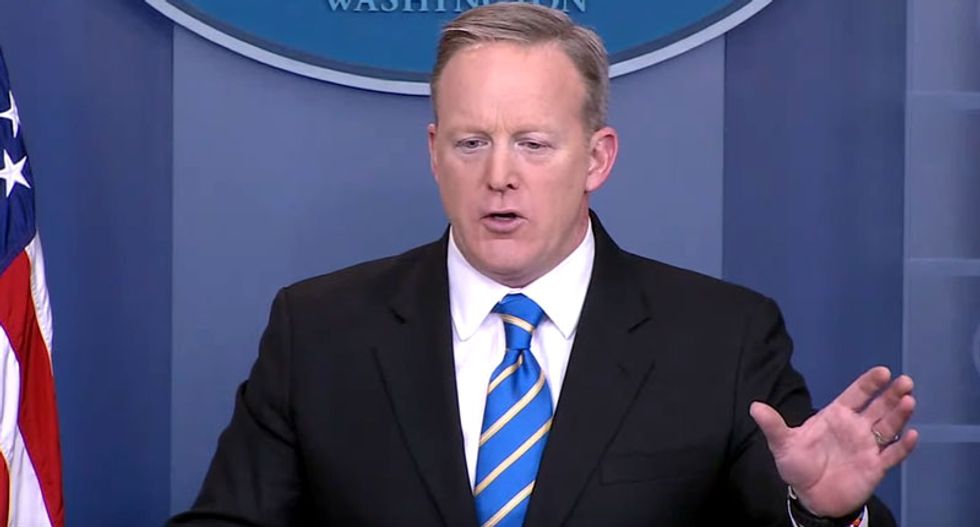 Trump administration press secretary Sean Spicer on Tuesday tried to back up his boss's claim that he only lost the popular vote thanks millions of "illegal" votes.

During his daily press briefing, Spicer was asked whether Trump actually believed that his loss in the popular vote to Hillary Clinton was due to at least 3 million people voting illegally -- and Spicer replied that he did.

"I think he's stated his concerns on voter fraud, and people voting illegally during the campaign," Spicer said. "And he continues to maintain that belief based on studies and evidence that were presented to him."

Despite this belief, however, Spicer says he's not sure whether the Trump administration would investigate this massive voter fraud, despite the fact that it would amount to the biggest electoral scandal in American history.

Given that Spicer presented no actual evidence to back up his claims of widespread voter fraud -- his only citation was of a 2012 study that did not actually demonstrate any evidence of voter fraud -- the press secretary was widely panned across the web for once again being dishonest with the American public.

It must be hard to get info to Sean Spicer after the briefing what with him allocating 20 minutes for screaming into a pillow in his office
— Thornton McEnery (@Thornton McEnery)1485285771.0

Sean Spicer is lying about voter fraud. This is an assault on democracy and the very concept of “truth.” https://t.co/eprMDZ7EQc
— Tom Steyer (@Tom Steyer)1485285449.0

How long can Spicer do this before he implodes from the cognitive dissonance? #C4NEWS
— Alex Klaushofer (@Alex Klaushofer)1485286460.0