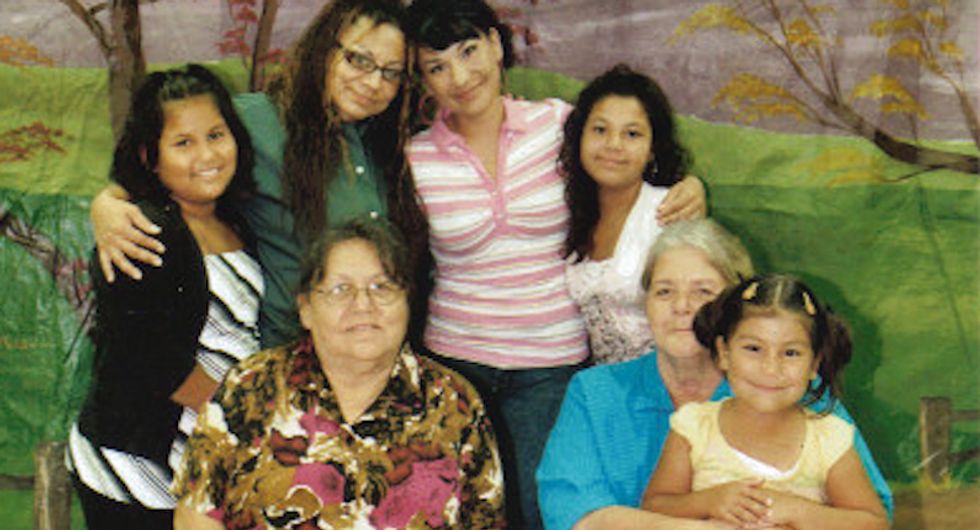 LaVonne Roach and her family.

Music and poetry run in LaVonne Roach’s family. Her mom sang gospel, and LaVonne and her daughter Clarissa both write poems. It helps them deal with the poverty, abuse, addiction, early deaths and violence visited by the federal government on generations of Lakota Sioux. "The attempted genocide of our culture, way of life, and language, which has continued to date...Then they wonder why there is so much violence and addiction in indian country," Roach writes from a federal prison in Dublin, California.

It’s also a way to help the family process the fact that the 52-year-old Roach, a mother and grandmother, was sentenced to three decades in prison for her alleged involvement in a meth ring. It’s more time than some people get for killing someone, even though LaVonne was not charged with a violent crime, either outside of prison or during the 19 years she’s spent behind bars.

Her daughter, Clarissa, born when LaVonne was a young teenager, concludes one poem hoping for her mom’s release with a prayer. “I pray for the day you will be free. The day it’s all over and at home, you will be.”

Her prayer may have almost been answered this year. The Clemency Project 2014, lawyers tasked with getting clemency petitions in front of the Department of Justice Office of Pardons, found that Roach fit the criteria for clemency under the President's program, which was designed to review the sentences of prisoners who might serve less time if they were being sentenced today. LaVonne looks to have been a model prisoner, picking up college classes and tutoring other inmates to help them get their GED.

But her petition for clemency does not appear to have been processed. It's one of several cases that have raised questions among prisoners and prisoner rights advocates about why some people have their sentences commuted and some don’t.

“There have been no Native-Americans granted clemency so once again not only did I grow up around extreme prejudice, I am experiencing it again,” LaVonne writes. “It's just too much for us. I just wish it was all a bad dream, I keep breaking down. I know death is the only thing in life that is guaranteed but my parents, children, and brothers and sisters have suffered right along with me.”

Amy Povah, who runs the group CAN-DO Justice through Clemency, writes over email, “I have over 270 emails from prisoners who are flooding me with questions, fears, concerns; my phone is ringing off the hook with family members desperately wanting to know what more they can do,” she says. “We're becoming dysfunctional due to the hysteria that is reaching a crescendo—I just pray President Obama is going to deliver a big list of grants soon.”

As Obama tries to cement his legacy on sentencing reform before Donald Trump takes office—both Sen. Jeff Sessions and Donald Trump have signaled they oppose granting nonviolent drug offenders clemency—some critics say the process is opaque, overly bureaucratic, and should not be conducted by former prosecutors who make up the Department of Justice. “People in DOJ are career prosecutors. They're good at saying no, it’s what they do,” P.S. Ruckman, professor of political science at Rock Valley College, told me in a separate article.

And although the President should be lauded for granting clemency to a record number of prisoners—1,176 so far—raising, then dashing, the hopes of prisoners is the dark downside of the program. Hoping for clemency, then seeing list after list of clemency recipients without your name on it, is a grim and desperate experience, prisoners tell Raw Story.

When a denial comes, the shock can be overwhelming. The Office of Pardons doesn’t tell prisoners why they’ve been denied, so they’re often left casting around for a reason. That, and writing desperate letters to the President, hoping he'll intervene at the last minute before Donald Trump takes office.

Ferrell Scott, a 54-year-old black man who’s serving life without parole for selling marijuana—a drug that’s becoming legal all over the country and that the President has admitted to smoking—has been writing letters to Obama non-stop after finding out he’d been denied clemency. “I am in dire and desperate need of your help, and I come to you in this 11th hour to earnestly implore you to please hear my voice,” he wrote in a letter to the President three days before Christmas. “I am writing you to ask for your mercy to please commute my sentence.”

“I am so depressed and in the words of Michelle [Obama]'I am shaken to the core' over the news that my clemency petition was denied,” he wrote. “It was all I thought about from the time I awoke in the morning 'til the time I closed my eyes to go to sleep at night.”

“I recognize that there are many factors that vary from case to case, but there doesn't seem to be any rhyme nor reason in regard to who's granted or denied clemency. It's like shooting craps or playing the lottery and it shouldn't be that way,” Scott wrote the President.

It’s not surprising that Scott was expecting clemency, given that the primarily white marijuana industry is turning a handsome profit in many states. It’s hard to fathom why some people are in prison for life for the same drug that other people are making money selling legally. Even one of the prosecutors on his case acknolwedged that he did not think Scott deserved to be in prison for the rest of his life.

Scott concluded one of his pleading missives to the President describing how his 5-year-old grand-daughter doesn’t get why he can’t ever visit. “She says, 'Why? Is it because you don't have a car?' I look forward to the day when I no longer have to have these heartbreaking bittersweet conversations with her,“ Scott writes.

LaVonne Roach is also getting desperate for the sake of her family, as the end of Obama’s Presidency nears. Her mother is very ill. “I just found out my mom has 3 months to live and I am feeling hopeless and helpless right now,” Roach writes. “I asked God for mercy. I thought my mom was getting better, she got out of the hospital and now this. She needs a transplant and the IHS (indian hospital) keeps denying her the support to get started looking for a donor and going to Sioux Falls to Mckennan Hospital to start doing more tests.”

“Yes we are taking it pretty hard,” her daughter, Clarissa, writes. “The doctors basically said she has about 3 months left if she don't get a transplant.”

“Oh my God I don't know what to do. My hearts so bad inside …” LaVonne writes. “I thought God was gonna have mercy on us. I made a mistake and I have paid dearly for my addiction. I'm not a bad person, I just made bad choices. Why is God doing this. I don't have anybody here and I'm going crazy.“

Many advocates involved in the clemency project are worried about what will happen when President-elect Trump takes office, but others have hope.

"We shouldn't discount Trump's ability to do good regarding clemency," Mark Osler, a law professor at the University St. Thomas, told the Washington Examiner. "The current process is terrible—a broken business model. It goes through seven sequential levels of review and four federal buildings. A businessman can't help but see the problem in that."