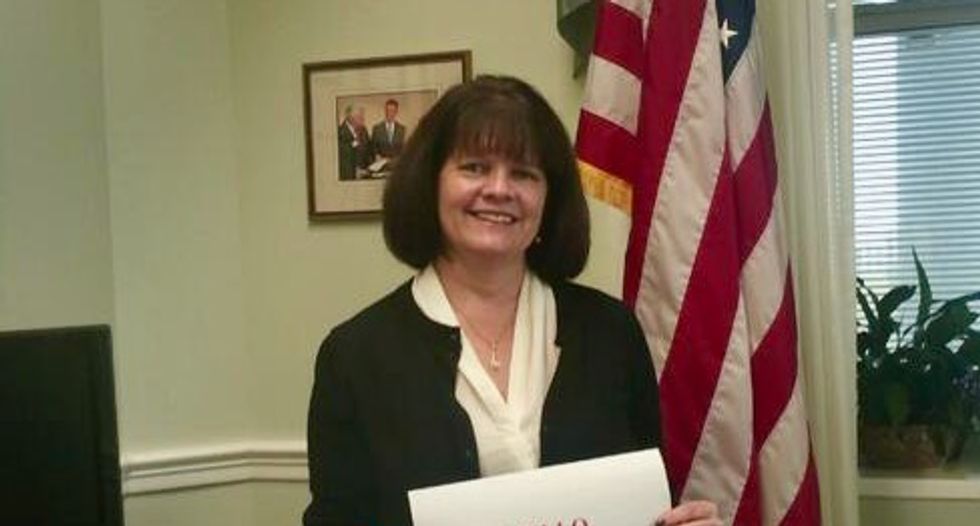 Commissioner Maureen Ohlhausen, a Republican on the Federal Trade Commission, has been named the FTC's acting chairman, the agency said on Wednesday.

In addition to Ohlhausen, the commission has two Democrats, outgoing Chairwoman Edith Ramirez who steps down early next month and Democrat Terrell McSweeny. It has two vacancies.

The appointment was made by a White House order, the FTC said on its website.

"I am deeply honored that President Trump has asked me to serve as acting chairman of the FTC and to preserve America's true engine of prosperity: a free, honest, and competitive marketplace," Ohlhausen said in a statement.

Ohlhausen became a commissioner in April 2012 with her term set to expire in 2018, according to the FTC website. The commission works with the Justice Department to enforce antitrust law and pursues companies involved in deceptive advertising as well as those accused of fraud.

As a member of the Republican minority in the commission, she has often dissented, sometimes arguing that there was insufficient evidence to justify FTC action.

In the past few days, she dissented on a $20 million settlement with the ride-hailing app Uber, which was accused of luring drivers with promises of inflated earnings, and the decision to sue Qualcomm for allegedly using its market power to maintain a monopoly on key semiconductors.

Also this month, she dissented on the FTC's decision to file lawsuits against two companies accused of striking deals aimed at delaying generic medicines from coming to market.

Ohlhausen has also been skeptical of the Federal Communications Commission's move to oversee aspects of security and privacy in the Internet, arguing the FTC should do the job.

But she signed on to an FTC lawsuit against Wyndham Hotels for being sloppy in its treatment of consumer data. The chain suffered three data breaches in less than two years, and subsequently settled.

She also voted against the FTC's lawsuit to stop food distribution giant Sysco Corp from buying US Foods Inc, a fight the agency won in court.

She voted in favor of the lawsuit to stop office supplies superstore Staples Inc from buying Office Depot Inc, which was also successful.

Before becoming a commissioner, Ohlhausen was a partner at the law firm Wilkinson Barker Knauer, LLP.

Ohlhausen has had a long list of posts at the FTC, including director of the Office on Policy Planning and attorney adviser for a former commissioner.