Trump presser rattles Chuck Todd: 'I am struck at how normal crazy looked' 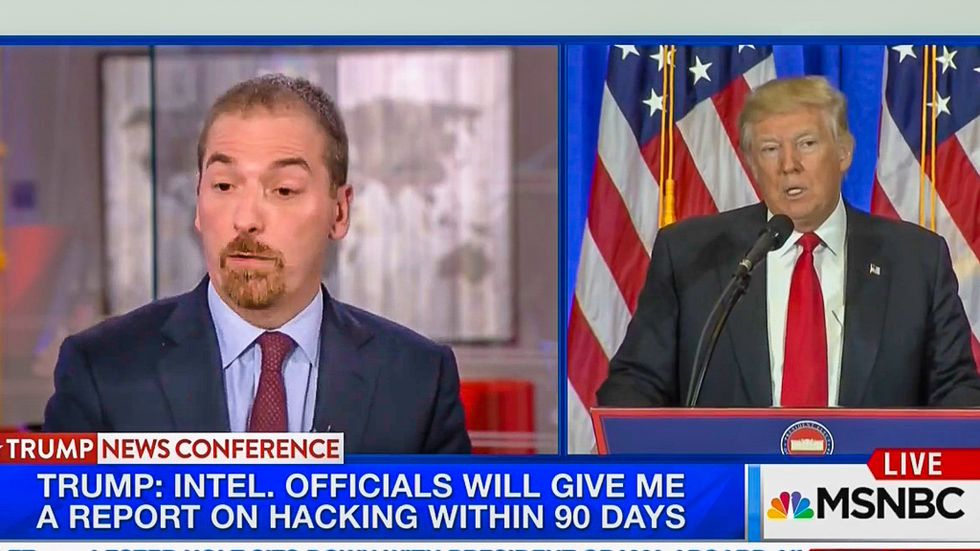 "I was struck big picture-wise of how normal a circus is now to us," Todd said. "This was a circus. We've never seen a president-elect, a transition like we saw today."

"The press conference gets interrupted, you have a lawyer in here [who] does half legal talk, half political spin," the NBC host continued. "I've never seen that, using the lawyer to say, 'He's here to make America great again. And oh by the way, I'm going to play constitutional lawyer.'"

"So I am struck at how normal crazy looked to us today. I mean, this was just a crazy scene. This is the normal of Donald Trump."

According to Todd, the press conference benefited Trump because "it made the press look disjointed, unorganized."

"It was a performance for his supporters and his people," he remarked. "If you're looking for answers out of Donald Trump, it's the one-on-one interviews. And I don't just say that because I'm biased about one-on-one interviews on Meet the Press. It is just, he is very good at deflection."

"If we were Turkey and we saw that the Turkish intelligence officials were leaking stuff on [Turkish President Recep Tayyip Erdogan], we would say, 'Boy, there's a political crisis going on in that country,'" Todd pointed out. "That's what this looks like from the outside world. The next commander-in-chief and the best, most powerful intelligence services in the world of the United States of America are at war with each other."

"This is a problem."