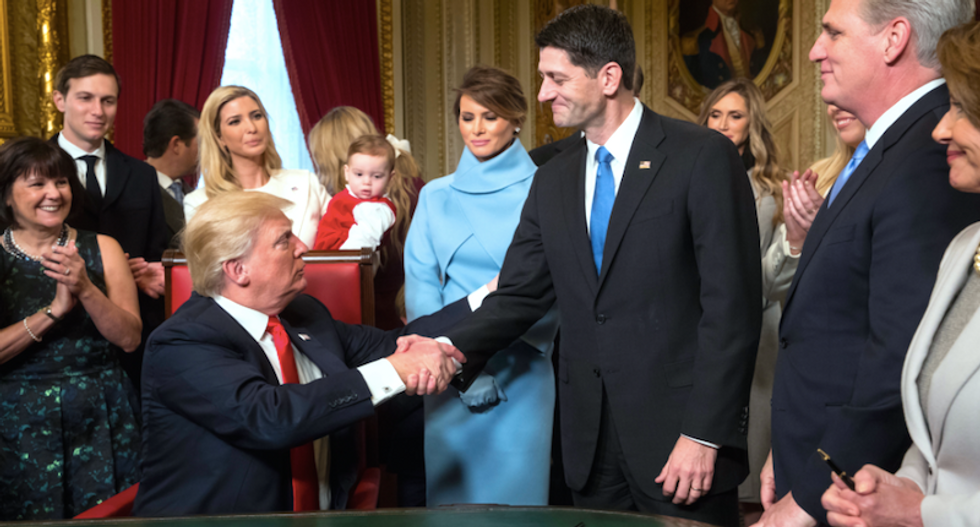 President Donald Trump will push Republican lawmakers on Thursday for swift action on his agenda including funding a U.S.-Mexican border wall, rewriting the tax code and repealing the Obamacare law, despite tensions over timetables and priorities.

Congressional Republicans are in Philadelphia for a three-day retreat to hammer out a legislative agenda, with the party in control of the White House, Senate and House of Representatives for the first time in a decade.

But Republican lawmakers have found themselves answering questions from reporters not just about their legislative agenda but also about Trump statements on matters such as alleged voting irregularities and CIA interrogation tactics.

House of Representatives Speaker Ryan took issue with the notion that congressional Republicans are not in synch with Trump, the New York businessman who was sworn in last Friday having never previously held public office.

"We are on the same page with the White House," Ryan said during a joint news conference with Senate Majority Leader Mitch McConnell.

"This is going to be an unconventional presidency," Ryan added. "I think you know this by now. ... I think we're going to see unconventional activities like tweets and things like that. I think that's just something that we're all going to have to get used to."

For weeks, Republicans talked about formulating an agenda for the first 100 days of Trump's presidency. In recent days, the talk has turned into a 200-day agenda for passing major legislation before the lawmakers' August recess.

Ryan said congressional Republicans have been working with the Trump administration on a daily basis "to map out and plan a very bold and aggressive agenda to make good on our campaign promises" including repealing and replacing Democratic former President Barack Obama's Affordable Care Act, as well as tax code and regulatory changes.

In comments suggesting a lack of confidence in finishing the job quickly, Ryan said on Thursday that it is a "goal" to take major steps by year's end, without guaranteeing that a replacement for Obamacare and a tax reform bill would be enacted by the end of December.

In his first address to House and Senate Republicans since taking office, Trump is expected to try to rally party lawmakers to take quick action on his priorities. House Republican leader Kevin McCarthy said the pace of legislative action may frustrate Trump.

"President Trump comes from a different world," McCarthy told reporters. "Out in the business community, he likes things done fast, and he's going to continue to push them."

McConnell said lawmakers will take up legislation to provide $12 billion to $15 billion to pay for Trump's planned wall along the U.S.-Mexico border. Trump signed an executive order on Wednesday for the wall to proceed, part of a package of measures aimed at curbing illegal immigration, although the action has tested already frayed relations with Mexico.

McConnell and Ryan did not say whether Congress would offset the cost of the wall by cutting other programs or simply add to already huge budget deficits that they have criticized for years.

"We anticipate a supplemental (budget) coming from the administration," Ryan said at a news conference. "The point is we're going to finance the Secure Fence Act."

Asked whether the Republicans could promise not to run up the federal deficit with everything on their agenda this year including the wall, infrastructure spending and tax cuts, Ryan said, "We are fiscal conservatives. What that means is we believe government should not live beyond its means."

Trump and his allies in Congress are certain to face Democratic opposition to many of his legislative priorities, and Senate rules allow the minority party to mount procedural hurdles that could slow or impede passage.

Some Republican lawmakers expressed hope that Trump will give them a clear idea about what he wants on issues such as the border tax that he has threatened to impose on U.S. companies that move jobs overseas.

"The president speaks in broad terms. This gives us an opportunity to talk back and forth," Representative Mike Kelly, who sits on the tax-writing House Ways and Means Committee, said of Thursday's meeting with Trump.

"All of us are taking a look at what is it that we can do so that what we send to the White House makes sense to the majority of us."

(Additional reporting by David Morgan and Susan Cornwell; Reporting by Susan Cornwell and Richard Cowan; Writing by Doina Chiacu and Will Dunham; Editing by Chizu Nomiyama and Frances Kerry)