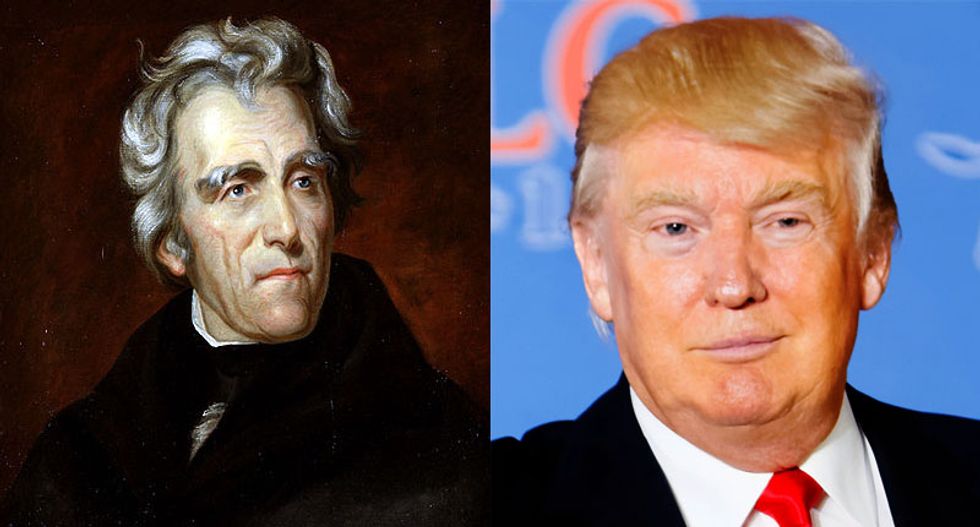 A presidential candidate who strikes a wide range of observers, including leaders of his own party, as dangerously abrasive, arrogant, and racist. Partly because of those qualities, the same candidate appeals stylistically to common-man voters who feel threatened by change, despite his being one of the super-rich himself. While this is Donald Trump in 2016, it also describes Andrew Jackson in the 1820s.

The first time Jackson ran for president, in 1824, the dominant Democratic-Republican Party had traditionally operated under a caucus system in which congressional leaders met to nominate a candidate. The caucus candidate in 1824 was Secretary of the Treasury William Crawford, but upstarts Henry Clay, John Quincy Adams, and Jackson challenged that verdict and took their cases to the voters. Jackson won only a plurality of those voters – and the presidency went to Adams as a result of a vote in the House of Representatives – but more than anyone he stood for anti-establishment politics. He carried that torch vigorously for the next four years until winning outright in 1828. Much like Republican elites today who must secretly be wishing they had a super-delegate system of their own with which to stop Trump, national party leaders then could do little as the National-Republican Party split into factions that did not coalesce into Democrats vs. Whigs until the early 1830s.

The seeming triumph of the common man in the person of President Jackson did not work out well for most Americans. Many historians in the 20th century, led by Arthur Schlesinger, Jr., saw in the Jacksonians’ rhetoric and program the forerunner of FDR and the New Deal. Those studying the era today are much more apt to stress the unpalatable features of Jackson and his party. Non-historians have enough discomfort with Jackson that multiple sponsors of the Democratic Party’s traditional Jefferson-Jackson Day dinners have changed the name of that event in recent years.

The reasons for that discomfort are legion. Jackson himself is now far less likely to be portrayed as an avatar of the working classes than as a big-time slaveholder (indeed human trafficker) and Indian fighter. His prickly sense of honor led him into duels and the United States into confrontations with world powers headlined by Great Britain.

In the policy realm, there is the supreme irony that this president who waged war on the United States Bank and distrusted all paper money as the 19th-century equivalent of a Ponzi scheme would be represented on every $20 bill. Jackson found support for his political economy among the throngs of white men who felt threatened by commercial and industrial change in the American economy. But his war on the Bank and the Democrats’ commitment to strictly limited federal government in no way helped the country during the severe economic downturn following the Panic of 1837.

Other top priorities of the Jackson administration revealed precisely who would and would not benefit from his regime. They included the now-infamous policy of Indian Removal, wherein Jackson sided with Georgia’s confiscation of Native American land and the eviction of the dispossessed; to the point of ignoring John Marshall’s Supreme Court ruling that this policy was unconstitutional. Furthermore, the rising abolitionist movement found in him a president who would condemn them as pestiferous traitors, in his Postmaster General one who would connive at the suppression of their literature being mailed, and in his party those who would pass the Gag Rule suppressing all antislavery petitions and discussion in Congress.

While these policies provoked outrage among his political opponents, none of them were particularly surprising given his stated principles and priorities as a candidate. It would likewise seem foolhardy for us now to fail to take Trump’s threats and promises seriously. Both supporters and opponents of Jackson found their election-year instinct that personality matters in a president fully vindicated by Jackson’s two terms in office. His personality as well as policies proved divisive enough that this era is still known as Jacksonian. Those who raise similar questions about Trump’s un-presidential disposition stand alongside Jackson’s critics.

For all these rather scary comparisons between Trump and Jackson, one vital difference may make all the difference between 1828 and 2016. Given that no women were enfranchised and only a small percentage of free people of color had the vote, Jackson only had to appeal to white males. His manlier-than-thou shtick thus worked extraordinarily well. Trump, as with so many other Republican candidates in recent years, seems to wish we still had an all-white-male electorate. It is to be hoped that he finds that acting on that wish will turn off more voters than it mobilizes. Thus, for all the instructive parallels between this election cycle so far and the bitter partisan politics of the Jacksonian era, time will tell whether we will indeed travel back to the 1820s.

Matthew Mason is an Associate Professor of History at Brigham Young University.