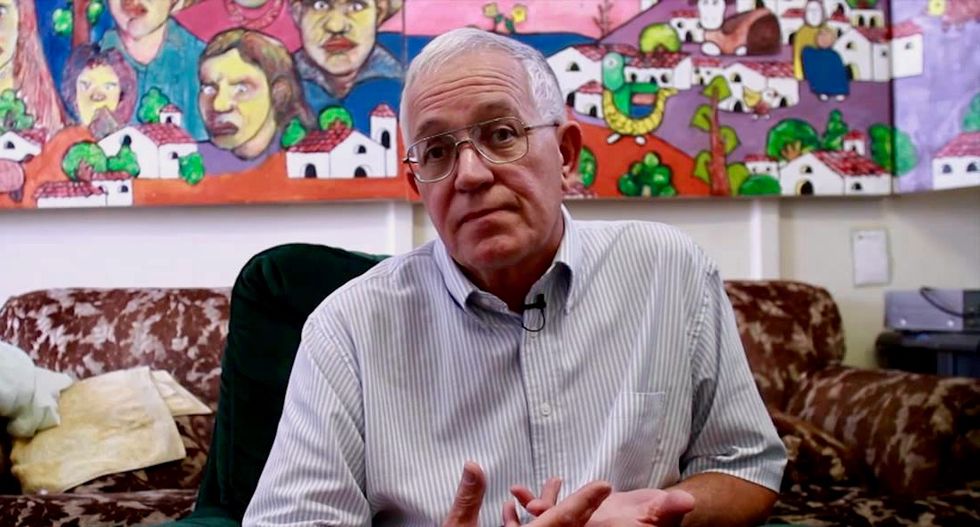 President Donald Trump's plan to end the policy of "catch and release" - where illegal immigrants are caught and then freed pending hearings - could hit a wall, immigrant advocates warn, and not the one he is planning to build on the Mexican border.

"OK, Mr Trump, you don't want them released, show me where you are going to hold them - show me the building," said Ruben Garcia, the director of Annunciation House, a Roman Catholic charity in El Paso, Texas, that gives shelter to migrant families.

"They are releasing them not because they want to do catch and release, but because detention centers don't have enough space," said Garcia.

That underscores one potential problem of ending the practice of "catch and release" - almost half the immigrants apprehended by U.S. officials are now Central American families or children, and only a tiny number of detention spaces are available for those categories of immigrants.

Trump did announce plans to increase the number of family detention centers, but establishing them will take time and could face legal challenges, legal experts on immigration said.

A Reuters review of U.S. Customs and Border Patrol data shows an accelerating trend of Central American families who hand themselves in at the border and are released while awaiting deportation or a decision on an asylum request.

In the last three months of 2016, the number of people - almost all of them families and children - who handed themselves in to agents along the U.S.-Mexican border rose by a quarter versus the same period the year before, CBP data shows.

Agents apprehended a total of 136,670 people crossing the Mexican border, the highest number since 2008, and 48 percent of those were unaccompanied children or families with children.

Nearly 45,000 parents with children were apprehended in the October-December quarter, but the border currently has beds for only around 3,300 people in this category of immigrants, mostly at the Karnes and Dilley detention centers in Texas, according to ICE data from 2016.

Because most of the families are from Central America, they cannot immediately be turned around and sent back to Mexico.

Lack of space in detention centers for parents with children means that almost all such migrants, who are mostly fleeing poverty and violence in Honduras, Guatemala and El Salvador, are fitted with an electronic ankle bracelet, given a court date and released.

Trump could expand a policy practiced under former President Barack Obama of using military bases to temporarily house more immigrants. The Fort Bliss base in El Paso has housed thousands of children since September, for example.

He could also explore ways to refit other existing facilities to help handle the flood of families.

Building more detention centers like Karnes and Dilley will take longer. They also typically face legal challenges by civil rights lawyers concerned about the living conditions in them.

Trump could also seek to expand an Obama program aimed at increasing the number of Central American asylum seekers who make their initial claim from their home country.

In the long term, he could ask Mexico to let immigrants make the asylum claims from there, although ties between the two countries are now seriously frayed because of Trump's vow to force Mexico to pay for a wall on the southern U.S. border.

Garcia, the shelter director, acknowledged that if Trump was finally successful in opening thousands more detention spaces for families, that would slow the numbers coming.

"The word would spread that the probability they will be locked up and put on a plane had become much higher," Garcia said. Central Americans are usually deported from the United States on flights back to their home countries.

"WANT TO BE APPREHENDED"

While the number of "turn-ins" - those who hand themselves in to U.S. authorities - are highest around McAllen, Texas, the jump has been particularly noticeable in the El Paso sector of the border with Mexico. Here, 60 percent of the immigrants apprehended between October and December were children or families.

For years a quiet spot on the immigration map, El Paso saw 5,200 families apprehended in the period, nearly three times as many compared to the same period a year ago, and 1,972, or double, the number of unaccompanied children.

"A lot of the traffic we are seeing right now is family groups ... coming across and they are looking for an agent right away to turn themselves in," Romero said, calling it a change from the past, when more people were trying to sneak in undetected. "They want to be apprehended."

The fence, finished in 2010, ends abruptly near pecan orchards and irrigation ditches on the Texan side, across the Rio Grande from Mexico's drug war-torn Valle de Juarez, a cotton-farming region now littered with burned-out homes.

Last February, Mexican President Enrique Pena Nieto and Obama's secretary of commerce, Penny Pritzker, opened a major new border crossing from Tornillo on the Texan side, to Guadalupe on the Mexican side, hoping to boost trade between the countries.

By November, truck traffic was still light across the bridge.

Instead, ICE opened a temporary holding center, with 500 places in white tents on the asphalt on the U.S. side of the bridge, to help process some of the surging numbers of migrant families apprehended by U.S. officials in the surrounding area.