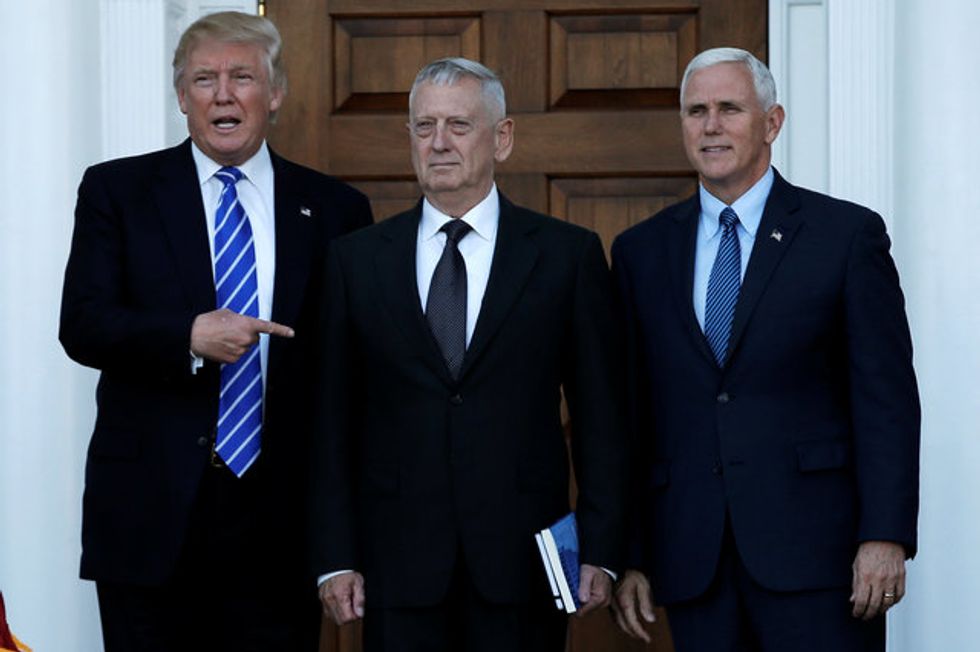 U.S. President-elect Donald Trump's team has canceled an appearance before Congress by his nominee for defense secretary, retired General James Mattis, regarding a waiver he needs for the post, congressional officials said on Wednesday.

The U.S. House of Representatives had been due to hear Mattis testify on Thursday and he had agreed to appear. Mattis, who retired from the Marine Corps in 2013, is technically ineligible to be defense secretary since he has not been a civilian for at least seven years. That means Congress would need to grant a waiver, something it has not done since 1950.

House Democratic Whip Steny Hoyer said it was his understanding the Trump transition team had blocked Mattis from testifying. Congressional aides also confirmed that Mattis had agreed to testify but the appearance had been blocked.

The decision appeared to be part of an effort to keep the attention on Mattis' confirmation hearing in the Senate, which is scheduled for earlier on Thursday.

"This (waiver) is not a minor issue. This is a major issue affecting the principle of civilian control of the military, and Ranking Member (Representative Adam) Smith believes deeply that General Mattis should come speak with the members about it," said Barron Youngsmith, a spokesman for Democrats on the House Armed Services Committee.

A Trump transition team spokeswoman did not speak directly to the House hearing but said Mattis' current focus was on the Senate confirmation process and "testifying at his confirmation hearing of the Senate Armed Services Committee."

"If confirmed he looks forward to working with both the Senate and House Armed Services Committees, which play critical roles in supporting our forces and ensuring civilian control of the military," Alleigh Marre said in a statement.

Hoyer said Mattis might be the best of the nominees for top administration positions put forward by the Republican Trump, who takes office on Jan. 20.

Republicans control the Senate, so Mattis is expected to be confirmed if he receives the appropriate waiver. The Senate and House must both agree to exempt him from a law written when the Department of Defense was created to ensure that the U.S. military is under civilian command.

Senators expressed little opposition to Mattis' appointment at a Senate Armed Services Committee hearing on civilian control of the military on Tuesday, as the panel considered whether to issue the waiver. Outside experts testified.

Senator John McCain, the Senate panel's chairman, said he would "fully support" the waiver legislation, which is expected to pass Congress.

Mattis, 66, has been warmly received by senior defense figures among both Republicans and Democrats, who believe he will adhere to core alliances and principles, even ones challenged by Trump during his election campaign.