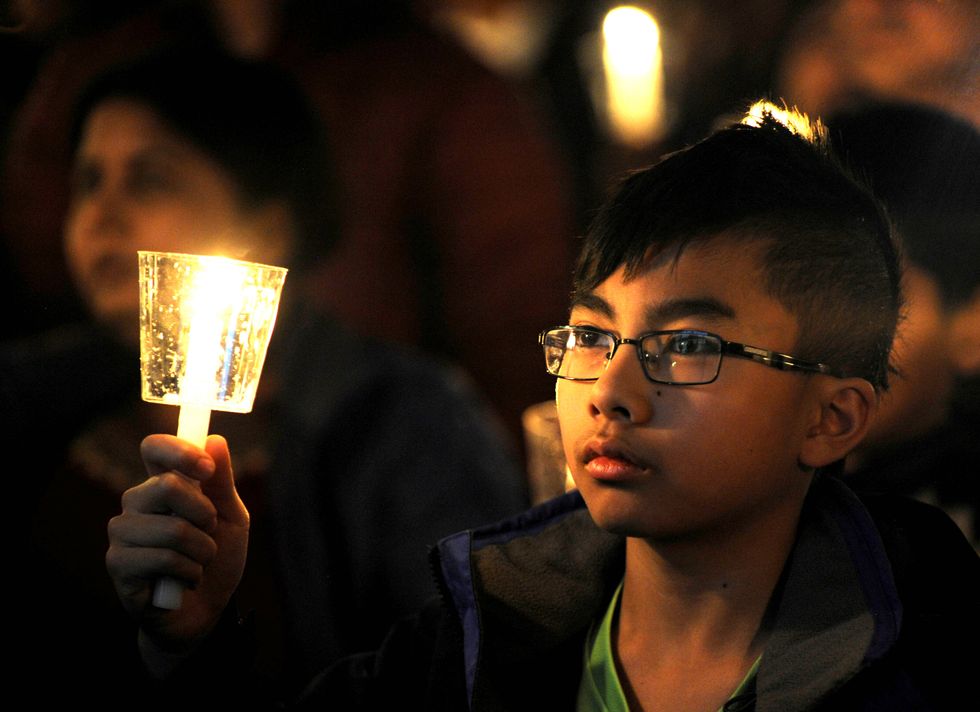 A boy holds up a candle during a vigil for Srinivas Kuchibhotla, an Indian engineer who was shot and killed, at a conference center in Olathe, Kansas, U.S., February 26, 2017. REUTERS/Dave Kaup

A Kansas man wounded when he intervened in a bar room shooting that killed an Indian engineer and injured another said on Sunday he was glad he risked his life in an incident U.S. authorities are investigating as a possible hate crime.

Ian Grillot, 24, was struck in the hand and chest at the bar in Olathe, Kansas, when suspect Adam Purinton opened fire on Wednesday evening. At least one bystander told the Kansas City Star he shouted "get out of my country" before shooting the Indian victims.

Purinton, a 51-year-old white Navy veteran, will make an initial appearance in Johnson County District Court on Monday. He faces charges of murder and attempted murder.

Grillot, a construction worker, said that he had to step in when the shooting started in the bar crowded with fans watching a University of Kansas basketball game.

"I was more than happy to risk my life to save the lives of others. There was families, there was kids inside," he said in a video released by the University of Kansas Health System, where he is recovering from his wounds.

"I couldn't stand there, I had to do something. That's why I acted the way I did."

The hospital said Grillot was continuing to improve. "I did get my chest tube out and that feels much better, but it is hard to describe how sore I feel," he said.

Purinton is accused of killing Srinivas Kuchibhotla, 32, and wounding Alok Madasani, also 32 in the shooting in Olathe, a Kansas City suburb. Both men were engineers with navigation device maker Garmin Ltd.

The Federal Bureau of Investigation is looking at whether the shooting was a hate crime, the official term for crimes motivated by bias or prejudice.

The shooting triggered outrage on Indian social media, where people voiced concern that U.S. President Donald Trump's "America First" position on immigration and jobs has fueled a climate of intolerance.

A White House spokesman said on Friday that any loss of life was tragic, but it would be absurd to link the killing to Trump's rhetoric.

Local media reports said Purinton often complained about his ill health and was mourning the death of his father.

An online GoFundMe campaign has raised almost $1.2 million for the shooting's victims and families.

(Reporting by Ian Simpson in Washington; Editing by Michael Perry)