Bernie Sanders warns Republicans worried about protests: You haven't 'seen anything yet’ 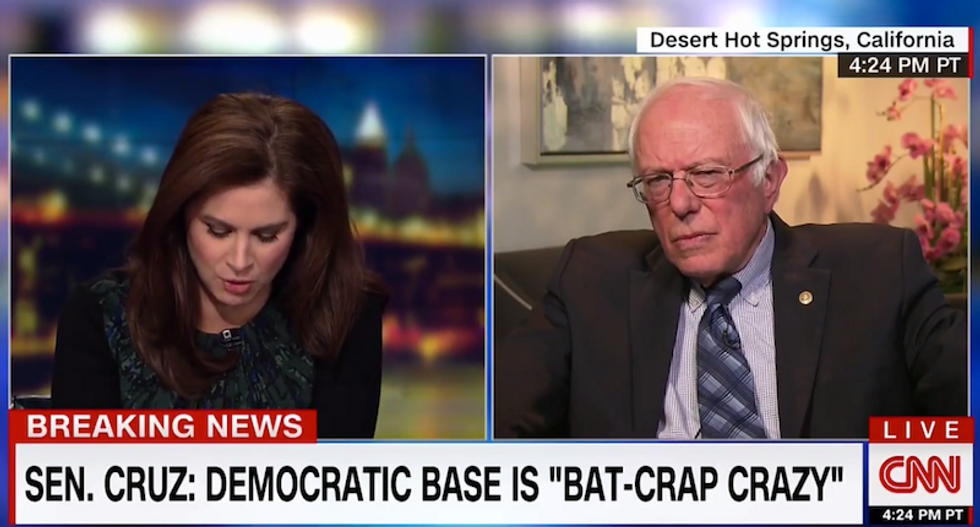 Vermont Sen. Bernie Sanders appeared on CNN's OutFront with Erin Burnett on Thursday night where the two discussed the many Republican town halls happening across the country, and in some cases, GOP representatives' decision to avoid them.

Burnett asked Sanders if he understood why some representatives are concerned for their safety because "they've been told they have a chance of being killed." Sanders responded, "No, I don't. No, I honestly don't. And I don't accept it for a minute. If you don't have the guts to face your constituents, then you shouldn't be in the United States Congress."

Sanders continued to explain that it's fine to have police and security at the meetings if necessary, "but don't use that as an excuse to run away from your constituents after you support repealing the Affordable Care Act, throwing 20 million people off of health insurance, doing away with pre-existing conditions."

Burnett later asked Sanders about White House Press Secretary Sean Spicer's assertion that there are paid protestors and agitators showing up at these town halls. "Can you say, senator, with absolute certainty that what he said is not true?" she asked.

"Look, I hope I do not shock your viewers by telling you that the White House occasionally lies," Sanders said, "and that's just another lie." He went on to explain that the uprising in the United States in this moment is a response to losing health care among other rights. "I think you are seeing people organizing effectively, but unlike the Tea Party, this is not being funded by billionaire class," said Sanders.

"There are people all over this country now — and by the way it's not just Democrats, there are Republicans who are looking at Trump and the White House and they're saying, 'Hey, you told us, Mr. President, that you were not going to cut Social security, Medicare and Medicaid,'" Sanders continued.

Sanders expanded on some of the concerns of voters, adding, "'You sent out a million tweets promising us you wouldn't do it, now you have brought into your administration people whose whole career is based on cutting Social security, Medicare and Medicaid. You told us, Mr. President when you were campaigning, you were going to stand up to Wall Street. You brought half of Wall Street into your administration. What's going on?'"

The former Democratic presidential nominee said later, "I think the Republicans have not seen anything yet. If they're worried about the protests they're seeing, they're going to see more. This coming Saturday we believe there will be well over 100 protests."