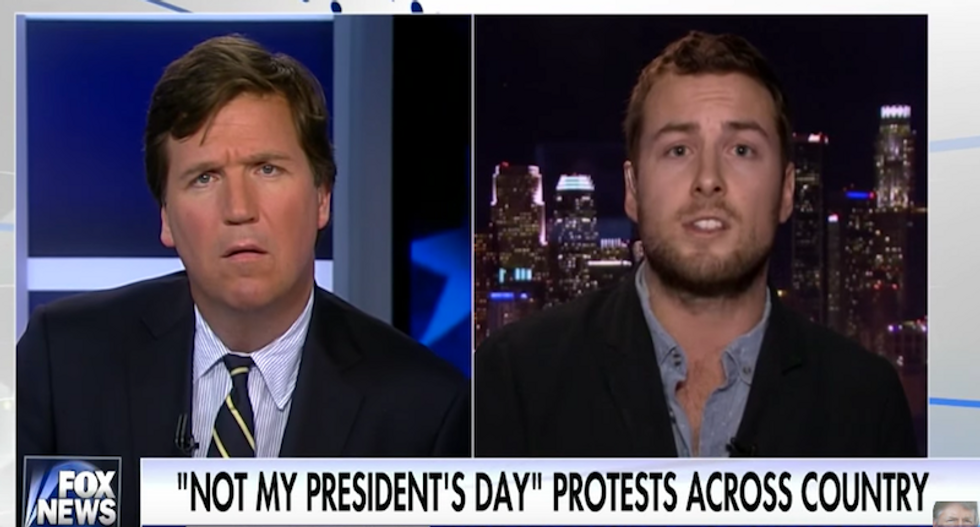 [Editor's Note: Raw Story previously referred to Shane Saunders as a hired actor. Saunders is an actor based in Los Angeles and is also active in anti-Trump protests. Raw Story regrets the error.]

After Fox News' Tucker Carlson's request for an on-air debate with Olga Lexell — a co-organizer of the national Not My President’s Day protests on Monday, Feb. 20 — was turned down, the conservative pundit instead booked an actor and casting agent from Los Angeles, the Daily Beast reports.

Lexell repeatedly turned down Carlson's invite to appear on the segment, which prompted him to invite someone who Lexell said "was not affiliated in any way with our rallies and was not an organizer."

Shane Saunders, the actor and casting agent who joined the segment, was referred to as an organizer of the event, both on the screen and by Carlson. "It's frustrating because, with the exception of one person, all of the organizers are women," Lexell said to the Daily Beast.

Lexell added, "For a man who knows nothing about the protests to go on TV unprepared, misrepresent our message, take credit for our weeks of hard work, and make us look bad—and for Tucker Carlson's team to go along with it—is just disappointing."

Carlson's debate style on Fox has been criticized as ambush, and Washington Post writer Erik Wemple, who appeared on Carlson's show last week wrote that the TV personality, "[blindsides] his guests and [keeps] them from issuing fully formed answers."

Lexell said Saunders is "a friend of some friends" who was not involved in any of the organizing and noted, "we had just organized a massive rally with ample news coverage and ... we didn't need to go on Tucker Carlson's show to validate that."

"Hey just so you guys know, that guy who you got on the show isn't affiliated with our event and didn't even attend any of the protests. I know him in real life and he's an aspiring actor," Lexell wrote to the show's producers after Saunders appeared on the segment.

"The program incorrectly identified a Los Angeles based protest participant as a ‘protest organizer’ in a graphic during Monday night’s telecast. While he was correctly identified in the introduction to the segment, we regret the graphic didn’t accurately reflect his role throughout the entire segment."

See the clip below.