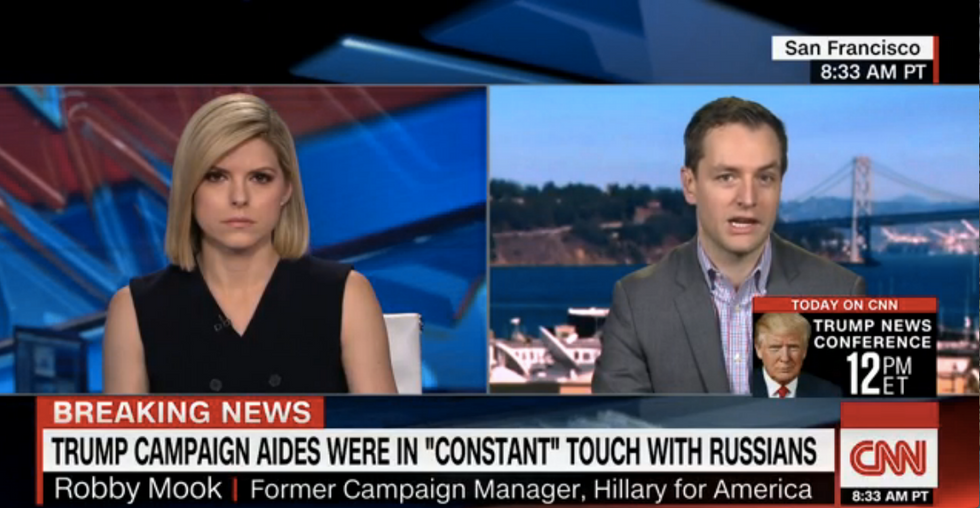 Hillary Clinton's former campaign manager Robby Mook told CNN on Wednesday that revelations about the Trump 2016 campaign's relationship with the Russian government warrant a full investigation along the lines of the 9/11 Commission.

Speaking with anchor Kate Bolduan, Mook said, "First and foremost, we've got to understand what these communications were between Donald Trump's aides on the campaign and Russian intelligence officials."

"We've been saying from the beginning that the Russians were the ones who stole the information from the DNC and put it out through WikiLeaks," Mook said. "There's a real question now: Were members of Donald Trump's campaign aiding, abetting or encouraging this to take place?"

Mook pointed out that we know Trump was briefed by intelligence officials about contacts with Russian intelligence, "And yet, he chose to lie."

Bolduan pointed out that communication and coordination between the Trump campaign and Russian intelligence are two different things. If it comes out that the conversations were benign, she asked Mook, what then?

Mook said that it would be "extremely strange" for a U.S. presidential campaign to be discussing anything with Russian intelligence services in the middle of an election.

"And it's particularly bizarre given the fact that we know Russian intelligence officials broke into the DNC and handed them to WikiLeaks for the purpose of hurting Hillary Clinton and helping Donald Trump," he said.

"The parallels to Watergate here are eerie, I have to say," Mook went on. "First, that a committee was broken into and now at every step we're learning more and more and it's getting closer and closer to the president himself."

"This is not about Democrats and Republicans. This is about Donald Trump, his campaign, what he knew and when he knew it and whether they were coordinating with the Russians. I hope people of both parties join together. I think there should be a 9/11-style commission made up of people outside of Congress, outside of the executive branch, experts who can get to the bottom of what happened."