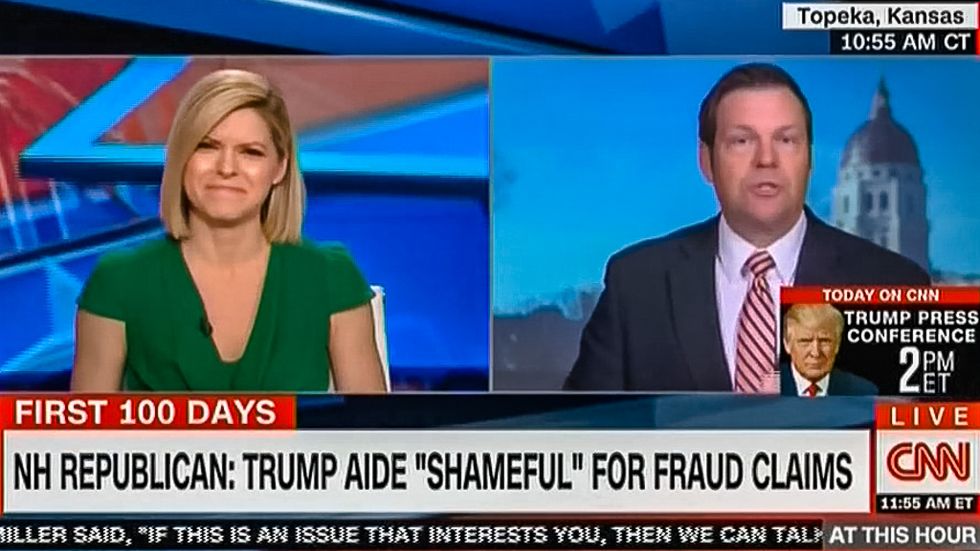 CNN host Kate Bolduan unsuccessfully tried to get Kansas Secretary of State Kris Kobach (R), an adviser to President Donald Trump, to produce evidence to back up the White House's voter fraud allegations.

During a Sunday interview with ABC News, White House policy director Stephen Miller defended Trump's claim that thousands of people had been bused into New Hampshire to vote illegally.

"Go to New Hampshire," Miller insisted. "Talk to anybody who's worked in politics there for a long time. Everybody's aware of the problem in New Hampshire."

ABC host George Stephanopoulos ended the interview by pointing out that Miller simply repeated Trump's claim without providing any evidence.

On Monday, Bolduan spoke to Kobach after noting that Miller had cited him as the source of the voter fraud allegations.

"Miller says, look to you, sir, for the evidence," the CNN host began. "Where is it?"

"On election day 2016, 6,000 people registered in New Hampshire using an out-of-state driver's license," Kobach replied. "Of those over 6,000, just under 3,000 -- so just under half -- used a Massachusetts driver's license. Now, some of those are going to be legit. They're going to be people who just moved to New Hampshire... but many of those will be out-of-state residents who voted in the state."

"You truly do believe that thousands of people came in from Massachusetts to vote in New Hampshire on election day?" Bolduan pressed.

"We will have data at the end of the month [about] how many of those 6,000 people voted in both New Hampshire and in one of the other states," Kobach promised.

"Mr. Secretary," the CNN host interrupted. "Wait a second. Stephen Miller, over the weekend, said thousands did vote illegally. Definitively saying that this actually happened. You're saying that there's going to be more data coming at the end of the month. So, do you have the evidence?"

"Voter registration does not equal fraudulent votes," she added.

"We have about 3 million people [in 30 states] who are registered to vote in more than one state, and that's not a crime," Kobach said. "But what is a crime is if you actually vote in both of those states or in more than two states."

"Of course it's a crime!" Bolduan agreed. "But where is the evidence of this widespread, rampant, millions of people voting? If it had happened, why haven't we seen it?"

Kobach fired back that CNN had not be covering the voter fraud prosecutions in his state.

The Kansas secretary of state countered by insisting that the nine cases were "just the ones at the top of the list."

"We've got many more in the hopper," he continued, sounding defeated. "We have a very small office. We've only got about two attorneys working on these cases. There will be more coming up."

"A small minority does not make millions and millions of widespread, rampant votes in this country," Bolduan stated. "What Stephen Miller and the president said over the weekend is this is exactly why they lost in New Hampshire. Not saying they were prospective cases, they were illegal votes."

"But in a close race..." Kobach said in his defense before getting interrupted.

"I just gave you the evidence," Kobach stuttered.