CNN host nails CPAC chairman for double standard: 'You are okay with all the misogynistic things' 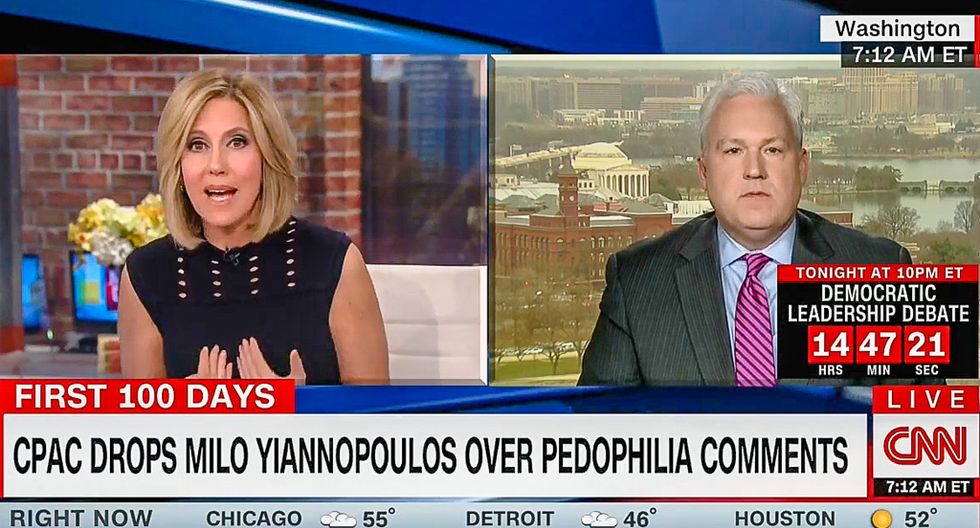 American Conservative Union President Matt Schlapp told CNN on Monday that the Conservative Political Action Conference would not have rescinded Milo Yiannopoulos' invitation over his history of racist, sexist and bigoted remarks -- but the comments defending child molestation had become a distraction.

Following the controversy over Yiannopoulos' pedophilia comments, CNN host Alisyn Camerota asked Schlapp if he understood why protests has erupted on colleges campuses when the former Breitbart writer was invited to speak.

Schlapp said that he agreed that the child molestation remarks were "beyond any barrier for political speech."

"That being said, what he was doing on college campuses was talking about the political controversies of the day," Schlapp opined. "And I do think it's a very troubling sign -- mostly run by people who don't have my politics obviously -- to try to shut down voices on the right."

"Just so that I'm clear, Matt, you were okay with all of the misogynistic things that he has said in the past?" the CNN host added.

"No! I'm not okay with it," Schlapp interrupted.

"So why did you invite him," Camerota pressed.

"An invitation is not an endorsement," the ACU president insisted. "We have all kinds of people speak whose views might, in cases, be repugnant to our attendees. But we want to foster a debate. Conservatives can handle disagreement and debate on the stage."

In the end, Schlapp said that Yiannopoulos' invitation was rescinded because "these questions around pedophilia and sexual contact with kids was going to distract from that political conversation."

"Aren't people allowed to have a line for what they consider repugnant?" Camerota wondered. "You have one. You just cancelled him. So, what if my line is the misogyny?"

"Your line is pedophilia. Why aren't some college campuses allowed to say their line is misogyny?" she asked.

"Well, they're allowed to," Schlapp declared. "I'm just trying to say what I think is better. A lot of times somebody with my politics is immediately called a hater. We're giving a title, we're given a category and we're oftentimes told we're not allowed to speak."

"I think what you're really telling me is it was the right thing for us to do to take back this invitation because there are certain topics that are just beyond the pale," he concluded.