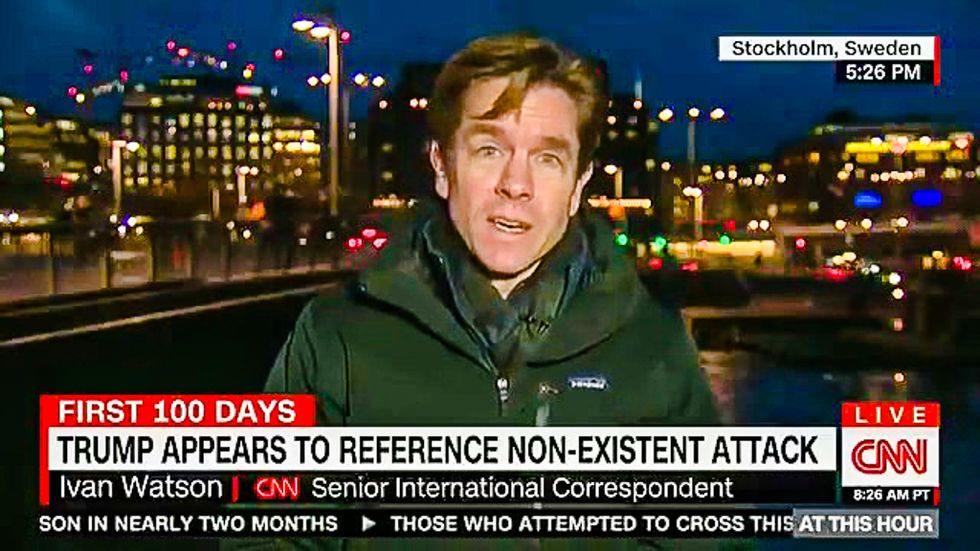 CNN correspondent Ivan Watson traveled to Sweden to investigate President Donald Trump's assertion that the country was under siege by Muslim refugees, but the report only managed to find unrelated crimes, like "a moose getting intimate with a wooden moose."

At a rally in Florida on Saturday, Trump suggested that there had been a terror incident "last night in Sweden." The president later clarified that he had been referencing a report he had seen the prior night on Fox News, which has been largely debunked.

Reporting from Stockholm on Monday, Watson told CNN host Ana Cabrera that he had been unable to back up Trump's claims.

"There was a car chase here in Stockholm with an inebriated driver," Watson said, citing a crime blotter published in a local paper.

"There was an incident involving a moose getting very intimate with a wooden moose somewhere upcountry," the CNN reporter added. "But nothing that really seemed to fit a pattern of Islamic-inspired terrorism. In fact, this country hasn't seen an attack like that in years and years."

Watson pointed out that Sweden was more likely to experience "neo-Nazi-style attacks on immigrants."

"National crime statistics here in Sweden are lower than the statistics in the U.S.," the CNN correspondent observed.