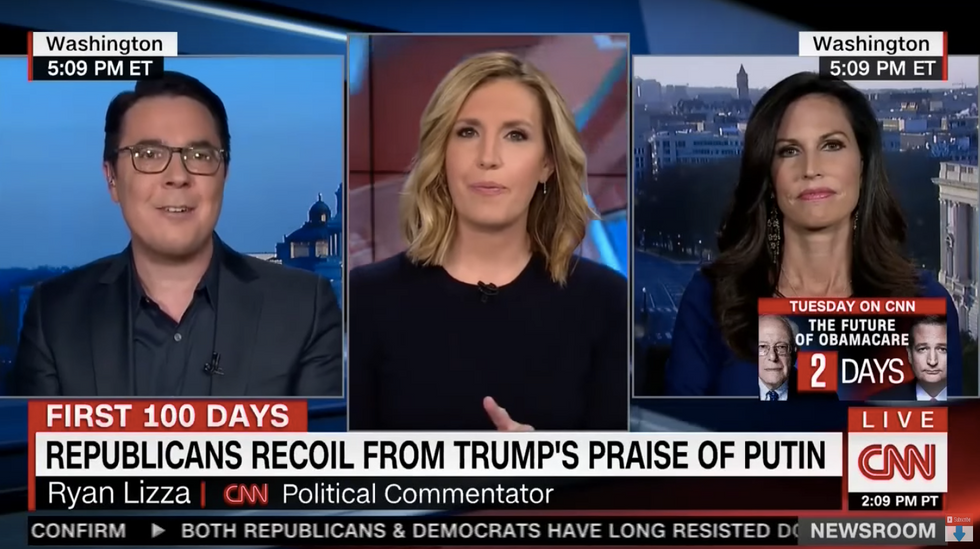 A spokeswoman for Pres. Donald Trump appeared to crash her own segment on Sunday when she insulted New Yorker columnist Ryan Lizza by saying moral relativism is a "new subject" for liberals.

Republicans, said Lizza, "are tearing their hair out right now because Trump refuses to say anything negative about Russia and he refuses to talk about the United States and the way it operates in the world as anything that is more special or unique than our adversaries."

Vice Pres. Mike Pence dodged the question on Sunday as to whether the U.S. was morally superior to Russia, which, Lizza noted, is normally a standard Republican talking point.

Harlow turned to Nance for her response, which was to immediately attack Lizza for calling out the administration's moral relativism with regards to Russia.

Conservatives have long used the phrase "moral relativism" as a cudgel against liberals, saying that liberals do not believe in right and wrong as absolutes and are therefore morally suspect.

In 2012, U.S. Rep. Paul Ryan (R-WI) stood on the House floor and declared that moral relativism is "the biggest problem in America," an erosion of all that traditional Americans hold dear.

Lizza wasn't letting the insult pass, however, perhaps uncomfortable with being called amoral on one of the largest news networks in the world.

"Please don't make a personal attack on me," he said. "Thank you very much."

"Stop," ordered Nance. "I wasn't even talking about you."

Lizza responded that she made the condescending remark right after he finished making a statement -- who was he to assume she was talking about?

"I would love to talk, but you talked over me, like, over a woman which is disrespectful," Nance complained. "But let me just say..."

"No, it's disrespectful to come on the air and accuse me of not caring about moral relativism," Lizza shot back.

Nance appealed to Harlow to make Lizza stop talking, "Poppy, are you going to let him just berate me on air? Are you going to continue to just let him do this?"

"You know what, Penny?" Harlow responded. "You said something, he's defending himself and now I'm out of time, guys."