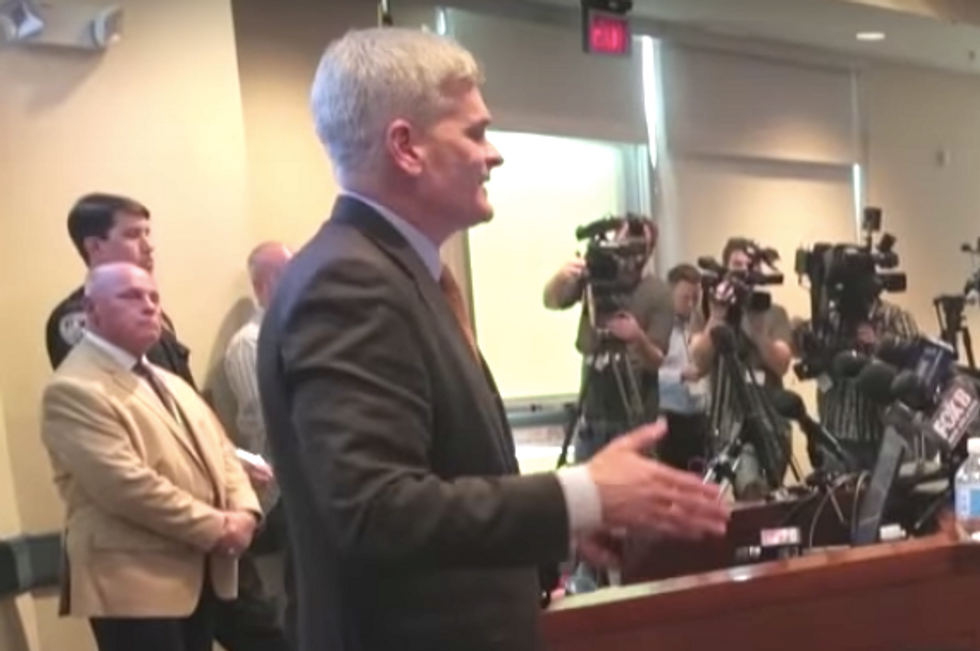 Republican Louisiana Sen. Bill Cassidy faced an angry crowd at a town hall meeting in Metairie on Wednesday when he showed up late and then tried to have the crowd participate in a group prayer.

"Pray on your own time!" shouted one angry constituent, according to NOLA.com. "This is our time."

A group of women located near the back of the room reportedly chanted, "Separation of church and state."

"Wow, they booed the name of Jesus," said Cassidy after the prayer -- led by Louisiana State Chaplain Michael Sprague -- got drowned out by protests.

The town hall was scheduled to start at 3:30 p.m. on Wednesday, but protesters began to arrive at 11 a.m. and by early afternoon, the parking lot was full. Some attendees parked blocks away at other locations in the neighborhood.

The room where the meeting took place was only designed to hold 200 people and the crowd on Wednesday spilled over into the hallways by the hundreds.

When Cassidy still hadn't appeared at 3:50, the group -- already angry over Republicans in Congress' decision to repeal the Affordable Care Act (ACA) -- got irritable and restless.

The senator finally appeared at 3:57, but the audience was in no mood for a group prayer.

"Let's get on with it!" one man shouted.

Cassidy attempted to explain to the assembly the bill he has proposed as a replacement for the ACA and began to show a Power Point presentation.

"We can see that on your website," someone in the crowd yelled, "let's move on to something else."

"Then Cassidy made the mistake of starting a sentence with, 'President Donald Trump has said...' and was immediately drowned in boos," wrote NOLA.com's Tim Morris.

Morris said, "The point was to express pure, unbridled anger. If not always directly at Cassidy, certainly at Trump."

At the end of the meeting, protesters chanted, "DO YOUR JOB!" over and over.

Cassidy is just one Congressional Republican who has been blasted by constituents at town hall meetings in recent weeks. Many Republicans are blaming paid, "out of state" agitators for disrupting their meetings while others are opting not to hold face-to-face meetings with voters at all.

“Many prominent Republicans haven’t even gotten to the point of trying to respond to criticism,” wrote the New York Times' Paul Krugman on Friday. “They’re just whining about how mean their constituents are being, and invoking conspiracy theories. Talk about snowflakes who can dish it out but can’t take it!”

Watch video from the town hall meeting, embedded below:

[Hat-tip to The Friendly Atheist]