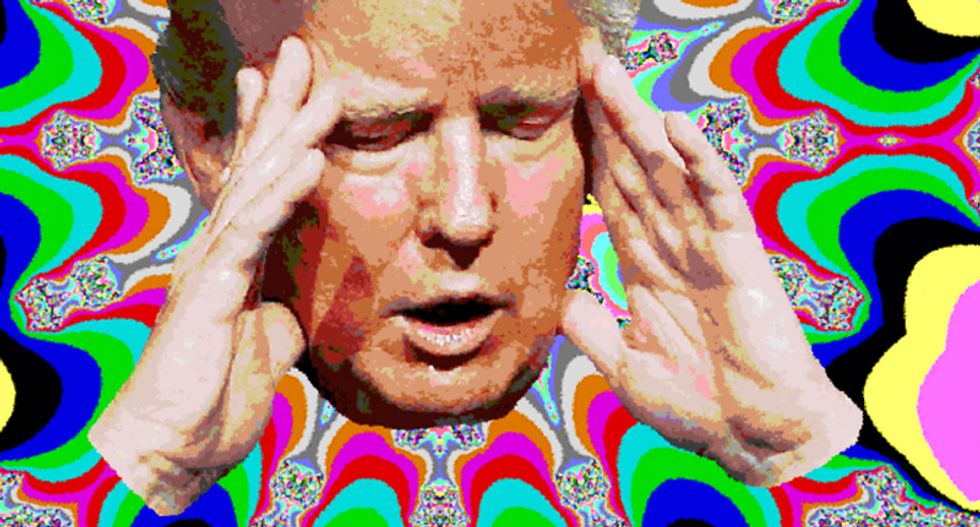 It’s no secret that Donald Trump is an egomaniac. That's pretty much a bipartisan belief. He’s been called a narcissist by more psychologists than you can shake a stick at. He’s obsessed with his TV ratings and crowd sizes, to the point where he will lie to others and possibly even himself about them. In Trump’s world, everything has to be “the biggest” or “the greatest”. If you criticize or poke fun at him, be prepared to feel his Twitter wrath and expect a barrage of vindictive personal attacks. But if you stroke his ego, he’ll praise you, even if you are a murdering dictator with dubious intentions.

Since it distorts his reality, clouds his judgment, and gets in the way of his work as President, Donald Trump’s biggest enemy is his ego.

But what if we could temporarily dismantle that ego, allowing Donald to see the world more closely to how it really is? To see that it doesn't revolve around him?

Some may be surprised to learn that scientific research has shown this can be done pharmacologically. Through small doses of LSD (lysergic acid diethylamide), also known as “acid,” Trump could put a hole in his ego, deflating it almost instantly. While this suggestion might sound facetious on the surface, in the last few years, the medical and scientific community has fully embraced hallucinogens such as LSD and psilocybin (the active ingredient in ‘magic mushrooms’) as revolutionary therapeutic agents, which create their effects through ‘dissolving the ego,’ or sense of self. By doing so, LSD has the potential to create a sobering and eye opening experience for vain, self-aggrandizing leaders like Donald Trump.

In the late 1950s and 1960s LSD gained popularity in the field of psychiatry as a form of psychedelic therapy with broad use, from treating depression to fighting alcohol addiction. While the drug proved effective, its recreational use among college students interested in mind expansion did not sit well with parents and authorities that were invested in preserving the status quo. In 1970 LSD was made illegal in the U.S., which meant its medical and therapeutic benefits wouldn’t be investigated for decades. But now we are seeing a resurgence in research with psychedelics and the results have been overwhelmingly positive. Recent studies have shown that psychoactive compounds like LSD and psilocybin can work wonders for alcohol and cigarette addiction, as well as depression and anxiety. Specifically, in a 2014 study, LSD was used to help anxious and depressed terminally ill cancer patients better come to grips with their situation. It only took two LSD-assisted psychotherapy sessions spaced two weeks apart to significantly decrease their anxiety—benefits that remained for a full year.

“Ego dissolution,” a term used by psychologists and neuroscientists, occurs when the sense of a boundary between oneself and the outside world fades, creating the feeling of a profound interconnectedness and unity with reality. When LSD causes the ego to dissolve, one undergoes a complete loss of subjective self-identity, which rejiggers how you relate to reality.

This often leads to spiritual or metaphysical experiences that help reframe life priorities, beliefs, and worldviews. And if there’s anything that Donald Trump needs, it's a reframing of priorities. A microdose of LSD may be all that’s required for him to see that constantly monitoring TV and media for mentions of himself is not more important than attending national security briefings. It may allow him to see reality from other viewpoints, like those held by the Muslim refugees and Mexican immigrants he’s working so hard to keep out, who only want a chance at a better life.

While the descriptions of the subjective experience of ego dissolution are illuminating, neuroscience studies are revealing the cognitive underpinnings of the phenomenon. A 2016 study, which used functional Magnetic Resonance Imaging (fMRI) to peer inside the brains of participants tripping on acid, discovered the neural mechanisms underlying temporary ego loss. They found that ego dissolution occurs when there is increased global connectivity between regions of the brain involved in higher cognition. This means that when participants were ‘tripping,’ communication between brain areas that are normally very distinct in their activity opened up, and the level of communication among these areas was positively correlated with the reported degree of ego dissolution experienced. Specifically, there was greater connectivity between sensory areas of the brain and a region associated with self-consciousness, called the frontoparietal cortex.

“This could mean that LSD results in a stronger sharing of information between regions, enforcing a stronger link between our sense of self and the sense of the environment and potentially diluting the boundaries of our individuality,” said Enzo Tagliazucchi of the Royal Netherlands Academy of Arts and Sciences in Amsterdam, the lead investigator of the study.

It’s also safe to experience ego dissolution through psychedelics, as long as you’re in an appropriate environment and under supervision. According to a study published in the Journal of Psychopharmacology in 2015, there is absolutely no connection between the use of LSD or psilocybin and mental health problems. While the parts of a trip that aren’t euphoric can be mentally challenging at best, and nightmarish at worst, the experience always passes. The difficulty and rigor of the mental journey may be a critical part of what makes it so enlightening and transformative.

I cannot imagine how scary a Trump trip could be, considering the many delusions he lives under, as well as the fact that his ego seems to influence his perception of virtually everything. I’m sure there is a lot of mental baggage to unpack, but I’m also certain that he’d come out of it a better person and a better president because of it—one that is more self-aware, compassionate, focused, and honest.

Now we just have to figure out how to get Trump to try it. The CIA has a history of slipping LSD into glasses and punchbowls of unsuspecting agents, military personnel, and government officials. Maybe they should pick up their experimental efforts again at one of the president’s social gatherings. Or maybe we could just get Peter Thiel to invite Donald to Burning Man. If we could somehow manage to get Trump to, in the words of LSD guru Timothy Leary, “Turn on, tune in, and drop out,” we could put the world on a track toward a brighter future with a more enlightened leader.