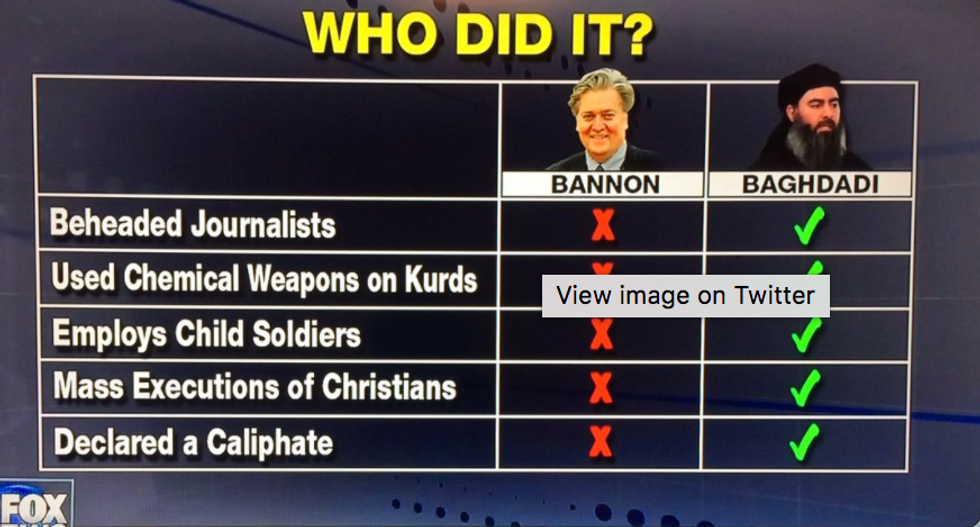 Fox News host Tucker Carlson on Wednesday took issue with a USA Today op-ed comparing the worldviews of Abu Bakr al-Baghdadi and Steve Bannon, providing a visual representation of the many, many ways in which the White House chief adviser is not, in fact, the leader of ISIS.

In an op-ed published Sunday, the USA Today editorial board argued Bannon and Baghdadi “both harbor apocalyptic visions of a clash of civilizations between Islam and the West,” and spin narratives for their followers of “sprawling conflict between believers of Prophet Mohammed and followers of Jesus Christ.”

“Apparently both see the battle between the U.S. and radical Islam as a clash of civilizations, or something,” Carlson said before inviting USA Today deputy editorial editor David Mastio on to defend the paper's op-ed.

“I want to play a quick game with you,” Carlson began, displaying a blank spreadsheet that featured both Bannon and Baghdadi’s names. “It’s called, ‘Who did it?’

The “game” ended up being more of an activity, as Carlson, unassisted, listed several of the most heinous crimes against humanity—including beheading journalists and employing child soldiers—then noted whether Bannon or Baghdadi were guilty of such crimes. For his part, the White House chief adviser managed to walk away from Carlson’s little game without so much as a blemish on his record of not committing war crimes.

The pair later clashed as Mastio tried to argue Bannon “shares a dangerous idea that plays right into the idea of al-Baghdadi.” While Carlson was unable to convince his guest that his paper was wrong for writing the article, the Fox News host did manage to provide unassailable proof that Bannon is definitely not Baghdadi.

Nor is he, as Twitter user @missmayn pointed out, Lord Voldemort.