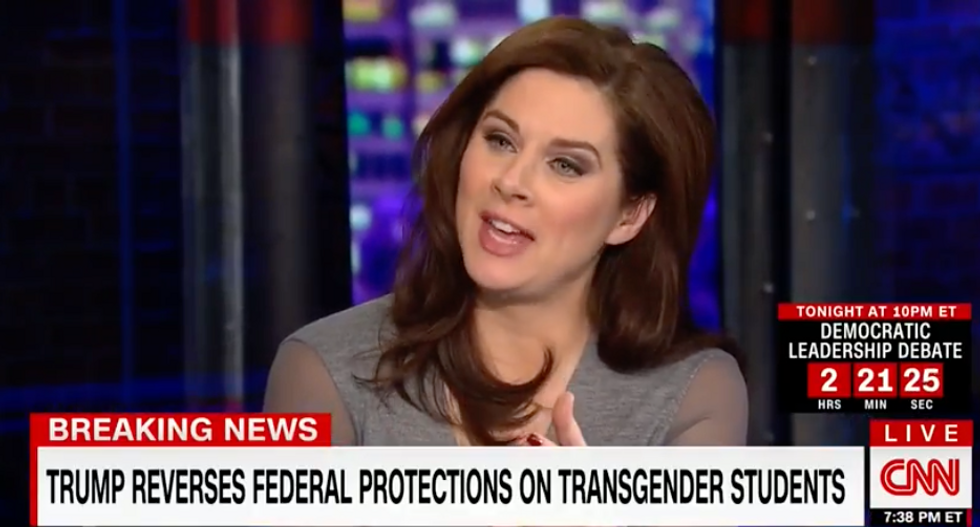 CNN’s Erin Burnett on Wednesday called out Donald Trump for “caving” to the GOP over his administration’s decision to rescind guidelines on protections for transgender students, arguing, “this isn’t Donald Trump actually triumphant here.”

Trump revoked guidance issued by President Barack Obama in May 2016 that instructed public schools to allow transgender students to use the bathroom of their choice. This, despite the president’s campaign-era indications that he would support LGBTQ rights.

"North Carolina did something that was very strong, and they're paying a big price and there’s a lot of problems," Trump said in 2016, referring to the state’s controversial HB2 bill which eliminated anti-discrimination protections designed to support the LGBTQ community.

"People go, they use the bathroom that they feel is appropriate,” Trump said. “There has been so little trouble.” Then-candidate Trump added he would be fine with Caitlyn Jenner, a prominent transgender figure, using whatever bathroom she chooses.

“This is amazing though, that the president is going against what he himself said,” Burnett said. “We all know that he believes he will be a hero if he keeps the promises he made.”

“He’s caving,” she continued. “Let’s just be clear here, Donald Trump is caving to part of his party. This isn’t Donald Trump actually triumphant here, if you listen to his own words.”