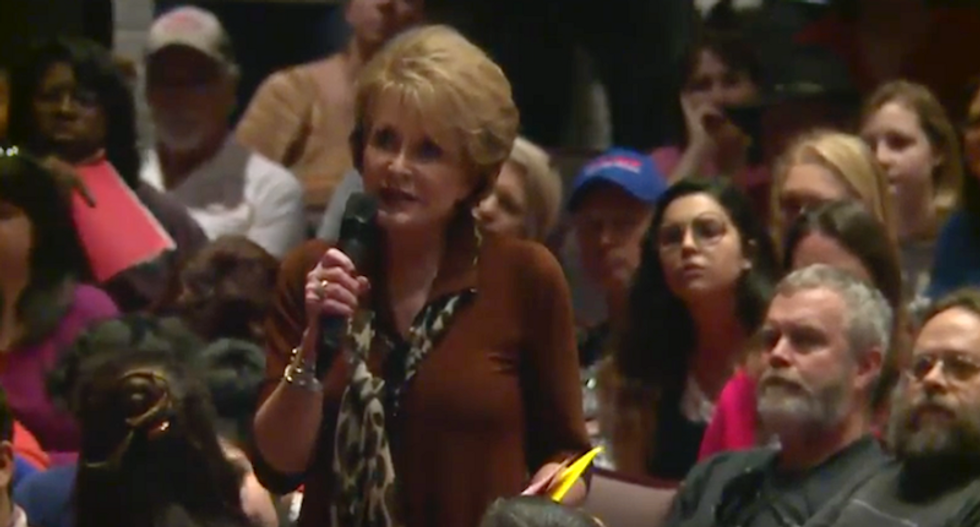 Republican Sen. Tom Cotton held a town hall Wednesday night in Springdale, Arkansas where hundreds of his constituents showed up to brief him on their concerns about health care, the border wall, and President Donald Trump's administration.

In a press release ahead of the event, Cotton wrote that he was looking "forward to welcoming Arkansans" at the Wednesday event, and they didn't easily let him off the hook. One constituent asked, "if we're so concerned about the deficit why are we spending 20 billion on a wall?" to loud cheers across the auditorium at Springdale High School, where the event was held.

One woman at the town hall called on all people affected by the Affordable Care Act to stand up, which was followed by a crowd of people throughout the room to stand.

Woman at Tom Cotton's town hall just asked anyone affected by Obamacare to stand up. Basically the whole crowd got up. pic.twitter.com/gL4p7DH9Qf

Another woman received a roar of cheers when she introduced herself as "not a paid protestor." The woman proceeded to share that she is a concerned citizen because "this administration is trampling our constitutional rights." She continued to share, "five of my ancestors fought in the Revolutionary War, one of my ancestors signed the Declaration of Independence."

Later, she asked if Cotton would "call for an independent, bipartisan [investigation] of President Trump, his campaign, and his administration," and was met with wild cheers from the rest of the audience.