Is this the most sexist Fox News clip ever? 'Natural state' of women is to 'be the beta' in marriage 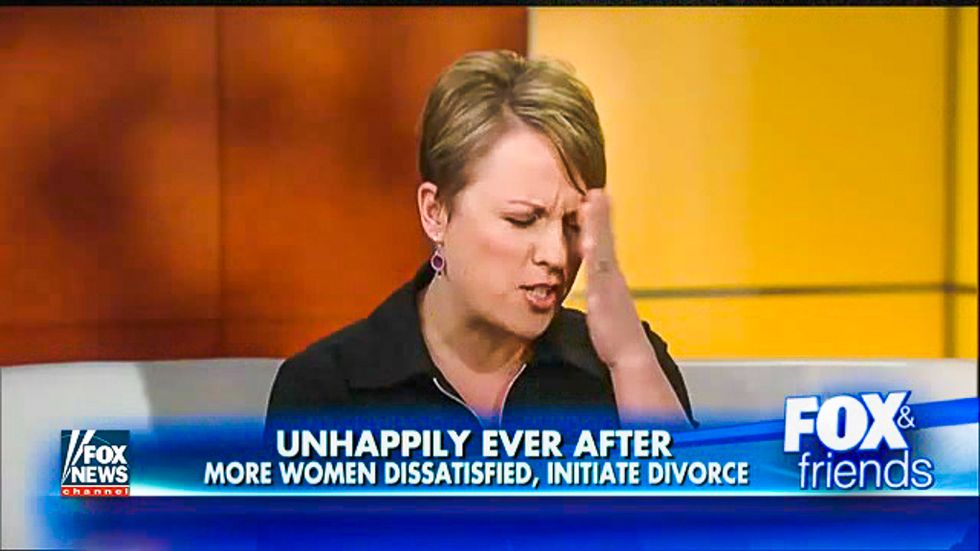 A Fox News segment on Thursday advised wives who want a successful marriage to be more compliant to their husbands.

In what Media Matters called "one of Fox News’ most sexist segments ever to air," author Suzanne Venker explained that a man is responsible for taking control of the relationship, from asking for the first date to proposing marriage.

"In that natural state, a woman is much more receptive to your energy," she opined. "And I think that what happens over time after you've been married a really long time -- especially once kids come into the picture -- is women get into this mode of sort of micromanaging everything."

"And that's all fine but if they don't switch over into 'wife mode,' kind of back where they were when you started, I think the relationship begins to deteriorate."

"So the beta becomes an alpha, and then the man becomes confused, and maybe she should be the beta?" Fox News host Steve Doocy offered.

And if you are bringing the alpha energy to the table, and he's an alpha by nature because he's got all the testosterone, you're going to be like two bulls in a china shop, right? And then if you want him to be the more feminine person in the relationship, I guess you could do that, but that usually doesn't work for most people because women are naturally feminine.

Venker, who is the daughter of anti-feminist Phyllis Schlafly, advised women to provide their husbands with "softness instead hardness, happiness instead of anger, being more compliant and less dictatorial -- basically not telling him what to do."

She added that wives should avoid characteristics like "nagging, perfectionist, telling what he's doing wrong."