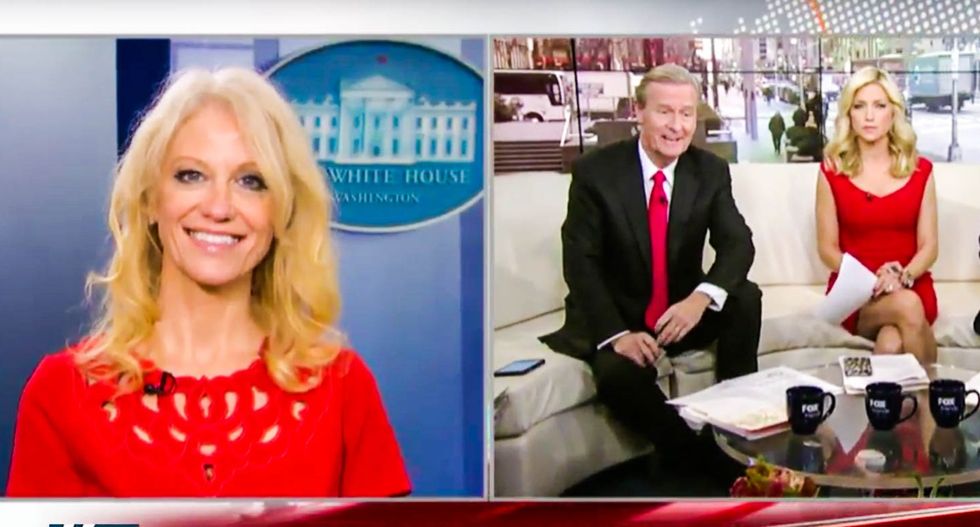 While Trump adviser Kellyanne Conway was getting aggressively questioned by multiple news outlets on the Michael Flynn scandal on Tuesday, she got a bit of relief when she went on Fox News's morning program Fox & Friends.

Instead of asking Conway to justify President Donald Trump's decision to continue employing Gen. Flynn as his national security adviser despite being warned by the Justice Department that he may have been compromised by Russian spies, the Fox & Friends crew instead asked Conway to talk about the disturbing number of leaks from within the government that were seemingly crafted to undermine Flynn.

"There are a number of major U.S. papers that apparently got the leaks from the intel community that said, 'Hey look, we've got the transcripts of what Mr. Flynn said on the phone to the Russian ambassador and it looks kind of shady," pointed out Fox & Friends co-host Steve Doocy. "Just the fact that there are these leaks inside the permanent government is troubling."

Conway replied that she was grateful to Doocy for bringing up this particular angle.

"Well, you may be the only outlet talking about that this morning," she replied. "So thank you for shining a light there."

Fox & Friends also interviewed conservative talk radio host Laura Ingraham on Tuesday, who similarly attacked leakers within the government who allegedly had their "knives out" for Flynn right from the moment of his appointment.

Additionally, President Trump took to Twitter on Tuesday morning to similarly attack the people who leaked the information about Flynn's conversation with the Russian ambassador about sanctions.

The real story here is why are there so many illegal leaks coming out of Washington? Will these leaks be happening as I deal on N.Korea etc?
— Donald J. Trump (@Donald J. Trump) 1487082534.0

Check out both Fox News clips below.