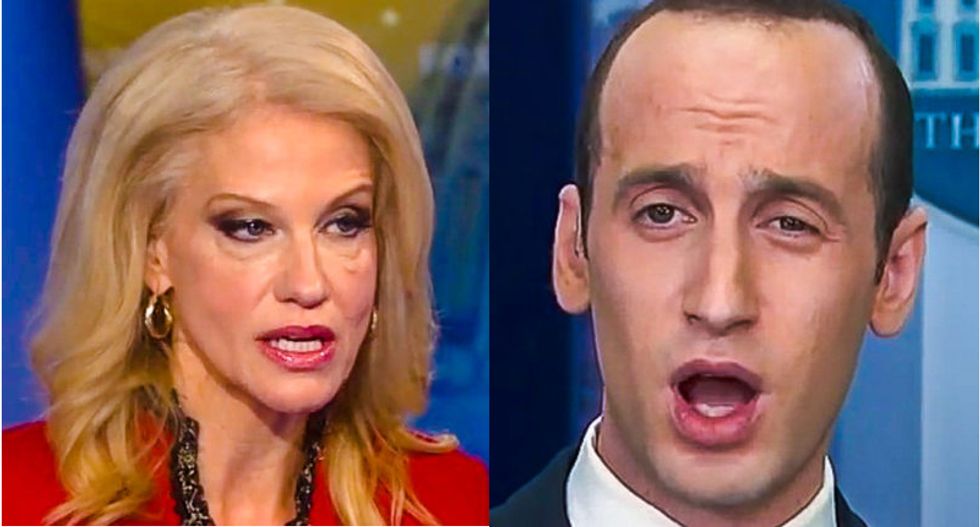 Is the Trump White House evil or just stupid? The answer to that burning question is, well, both. In Monday's column, Paul Krugman takes as his subject the incompetence piece, which is evident in matters both large and seemingly trivial.

Though when you can't be bothered to learn how you should address the Prime Minister of Japan, or the relatively simple fact that in Asia, the order of names is reversed, it seems more than a little representative of a certain incurious attitude. Trump addressed Abe Shinzo as Prime Minister Shinzo, the equivalent of calling Trump President Donald.  "Trivial?" Krugman asks. "Well, it would be if it were an isolated instance. But it isn’t." In fact it appears that for both the Republican-led Congress and the clowns in the White House, ignorance is seen as a kind of strength.

We see this on legal matters: In a widely quoted analysis, the legal expert Benjamin Wittes described the infamous executive order on refugees as “malevolence tempered by incompetence,” and noted that the order reads “as if it was not reviewed by competent counsel at all” — which is a good way to lose in court . . . We see it on national security matters, where the president continues to rely on a chief adviser who, suspicious closeness to the Kremlin aside, appears to get his strategic information from right-wing conspiracy theorists . . . We see it on education, where the hearings for Betsy DeVos, the education secretary, revealed her to be completely ignorant about even the most elementary issues . . . We see it on diplomacy. How hard is it to ask someone from the State Department to make sure that the White House gets foreign leaders’ names right? Too hard, apparently: Before the Abe flub, the official agenda for the state visit by Theresa May, the British prime minister, repeatedly misspelled her name.

Want more? Not being aware Frederick Douglass is dead, or who he is. A parade of embarrassing typos. And on and on.

And when it comes to economics, well, Krugman says, there is literally no one home. The Council of Economic Advisers has been demoted from the cabinet, he points out, and anyway, no one has been appointed to it, which might explain why Trump's much vaunted campaign promise of an infrastructure plan is nowhere to be found.

Trump may be the most glaring example of the turn towards ignorance, but Krugman finds other excellent nominees for the ignoramus hall of fame in the GOP.

There is, for example, the sudden realization that repealing any major part of Obamacare will make millions of people lose insurance. It's not as if sober analysis had not uncovered this fact years ago. But the people now in charge of the executive and legislative branches aren't fans of competent analysis, because it does not line up with their ideology. "Competent lawyers might tell you that your Muslim ban is unconstitutional," Krugman writes. "Competent scientists that climate change is real; competent economists that tax cuts don’t pay for themselves; competent voting experts that there weren’t millions of illegal ballots; competent diplomats that the Iran deal makes sense, and Putin is not your friend. So competence must be excluded."

The election was not just a triumph of bigotry, Krugman posits, but a rejection of experts, careful thought and anything that smacks of intellectualism. Too elite, apparently.

On the bright side, he suggests, it just might be that the idiocy will put the brakes on the malevolence. Until some horrible crisis happens, and then you really do want people who know what they are doing.