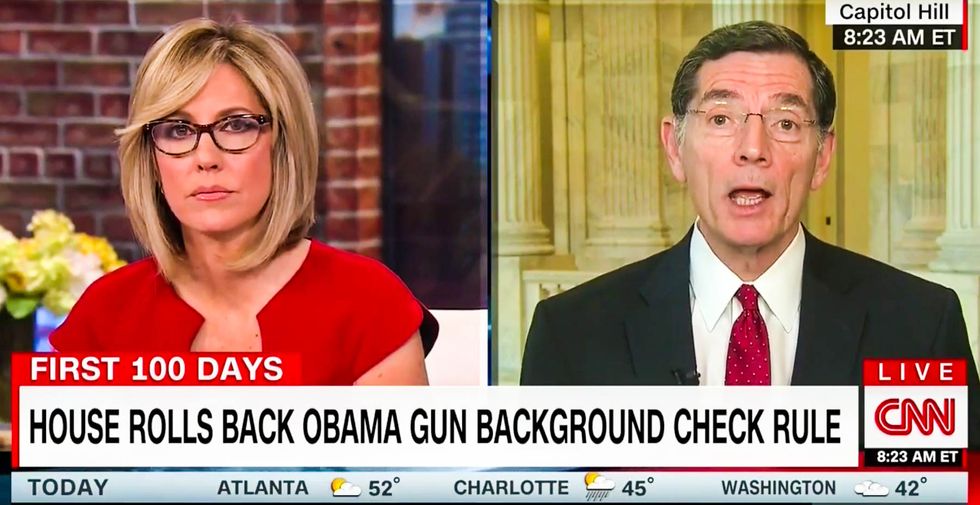 The House of Representatives on Thursday evening voted to overturn an Obama-era rule that had been put in place to prevent people with severe mental illnesses from buying firearms.

The rule, which was finalized by the Social Security Administration in December, banned Social Security beneficiaries from buying guns if their disability payments are handled by an outside party due to their "marked subnormal intelligence, or mental illness, incompetency, condition, or disease."

Appearing on CNN Friday morning, Rep. John Barrasso (R - WY) defended his vote to overturn the rule on the basis that it went into effect at the very end of President Barack Obama's second term, and was thus a "midnight" regulation that deserved to be scrutinized. Although the rule was only put into effect in December, it had actually been in the works for years, and was a response to the Sandy Hook massacre in 2012.

But when Barrasso was asked repeatedly by CNN's Alisyn Camerota whether he thought that it was a good idea to give people with severe mental illnesses guns, the congressman repeatedly deflected and refused to answer the question.

"As I understand it, it involves 75,000 people with mental disorders so severe that they cannot work, and they have someone else manage their Social Security benefits," Camerota said. "How does it make sense to let them have guns?"

"This is a new change by President Obama, a midnight regulation on his way out the door," he said. "It should be subjected to full debate, discussion, and the House voted on it yesterday."

Camerota wouldn't let him off the hook, however.

"If someone has a mental illness so severe that they cannot work, should they be able to have a gun?" she asked.

"Well, the question is, is somebody able to have a gun at the same time they're receiving Social Security disability benefits," Barrasso replied. "And you can take a look at how those decisions are being made. But for seven or eight years, right up until the end of President Obama's turn, it was fine."

"Senator, are you comfortable with somebody having a mental disability and having a gun?" she asked.

"You can take a look at what the Constitution says, which is what I do," he replied. "As a physician who's spent lots of time dealing with patients with all different backgrounds, there are clearly people who have been labeled one way or another, and I'm not comfortable with midnight regulations by the president."