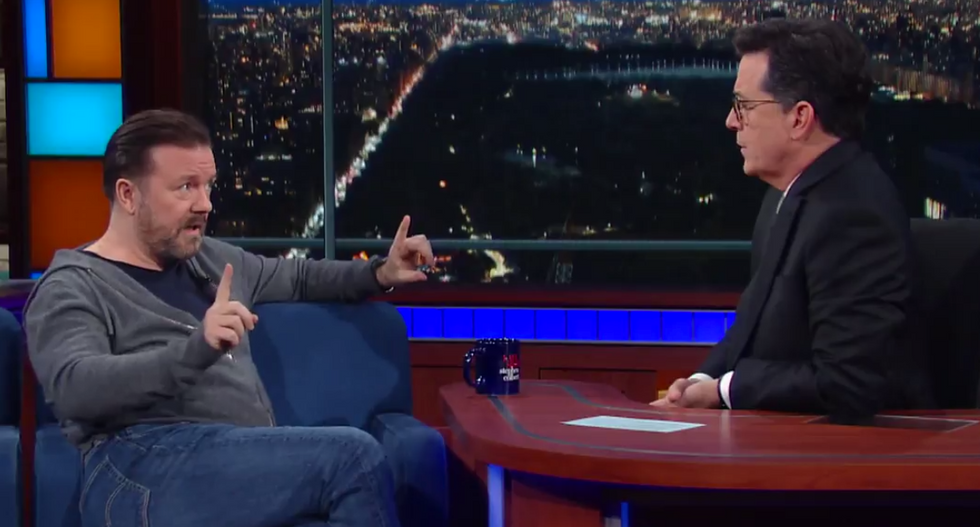 Avowed Catholic Stephen Colbert challenged Ricky Gervais in a spirited debate over the existence of god and Gervais’ embrace of atheism.

“I know that you’re an atheist,” Colbert began during Wednesday’s episode of the Late Show with Stephen Colbert. “Do you want to debate the existence of god?”

After Gervais signaled he was up for the challenge, Colbert asked his fellow comedian, “Why is there something instead of nothing, why does the universe exist at all?”

Gervais protested the premise of Colbert’s question, insisting the argument for religion isn’t over why the universe exists, but how. He explained that he’s “agnostic atheist,” meaning while he doesn’t know for sure whether there is a god, he doesn’t think anything outside “science and nature” created the universe.

“Atheism isn’t a belief system,” Gervais said, arguing it is “only rejecting the claim there’s a god.”

Colbert then asked his guest if he ever has “a feeling of great gratitude for existence.”

“Of course!” Gervais replied. “I know the chances are billions to one that I am on this planet as me and never will be again.”

Colbert explained that while he knows he cannot—nor does he want to—convince Gervais of a god, he personally feels a “strong desire to direct that gratitude during something or someone.” The Late Show comedian argued that Gervais’ belief in science means he is putting faith in people like Stephen Hawking and Albert Einstein.

Here, Gervais sharply explained the difference between science and religion:

“I don’t need faith in science,” Gervais continued. “I don’t need faith to know that probably, if I jump out of a window, every other time somebody jumps out of the window, they smash to the ground because of this thing called gravity.”

Watch the full video below, via the Late Show with Stephen Colbert Twitter:

You don't want to miss this on #LSSC tonight: @rickygervais debates religion, science, atheism and more with @stephenathome. pic.twitter.com/HeKybVnnny