Safe on US soil, new arrivals breathe sigh of relief 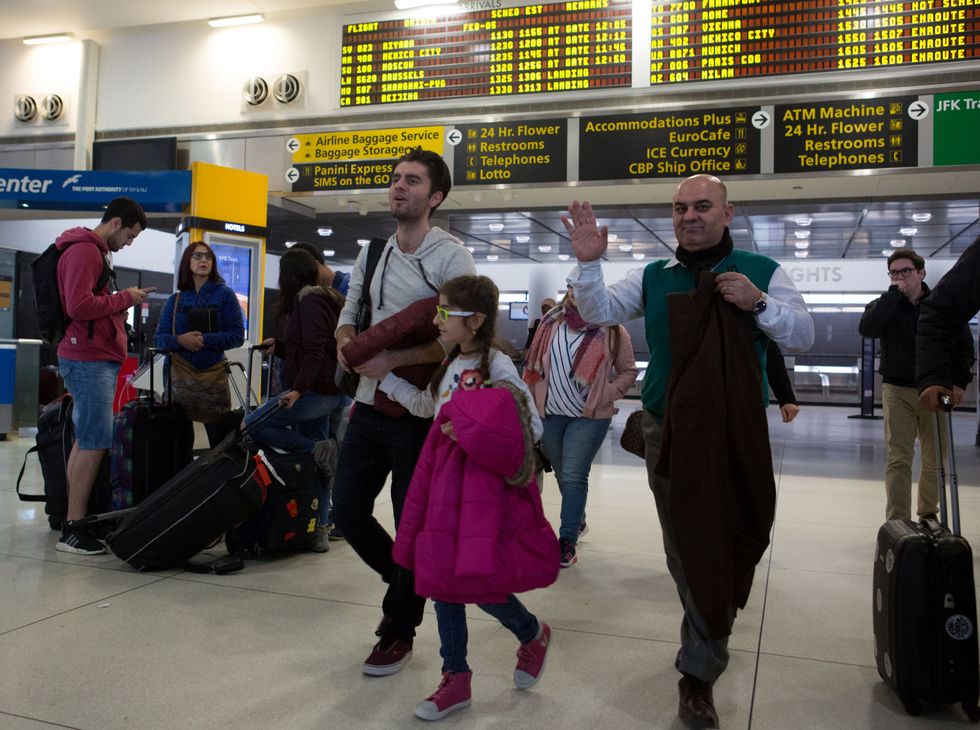 For Fuad Sharef and his family, the tortuous ordeal of getting from Iraq to Nashville, Tennessee, was nearly over more than a week after it was to begin.

The former U.S. development agency subcontractor, his wife and three children landed in New York on Sunday afternoon on their second attempt to reach the United States to begin a long-awaited new life.

“We are very happy to be here,” Sharef said at John F. Kennedy International Airport. “It was a long time to get here - a lot to get here.”

The Sharef family was one of many who endured more than a week of uncertainty after President Donald Trump signed a 90-day ban on citizens of Iraq, Iran, Libya, Somalia, Sudan, Syria and Yemen from entering the United States on national security grounds.

Like the Sharef family, many of them took advantage of a Seattle judge's ruling on Friday, effectively suspending the executive order until at least Monday, to complete their disrupted journeys, rather than risk the window shutting tight again.

About a week earlier, the Sharefs were prevented from boarding a U.S.-bound flight via Cairo after Trump issued the order, which also included a 120-day ban on all refugees.

But hours after the judge's ruling on Friday, they took one of the first planes out of Erbil, the capital of the Kurdish region in northern Iraq, with a connection to the United States. Landing at JFK, they were soon to board a short flight to their final destination in Tennessee.

"Yeah, my life changed dramatically," Sharef said, reflecting on the tumultuous week before leaving Erbil. "I learned a lesson that if you have a right, never surrender."

The Tennessee Immigrant and Refugee Rights Coalition planned to welcome Sharef's family when they arrived.

"Nashvillians fought to bring them home - and now we can show them the very best of Southern hospitality!," the coalition said on a Facebook event page.

Nael Zaino, a Syrian refugee who worked for the International Organization for Migration in Turkey, also received help from Americans.

He was reunited with family in Boston on Saturday after getting a waiver from the State Department, thanks to intervention by U.S. lawmakers contacted by Zaino's relatives.

Zaino's arrival was relatively smooth, though he was pulled out of the arrival line, put through "secondary screening" and asked a long series of questions before a U.S. agent stamped his passport and gave him a friendly send-off.

"I didn't believe it until I came out of the airport," Zaino said. "At that moment I realized I'm not in a dream.”

Zaino had received a visa to join his wife and U.S.-born infant son in Los Angeles on Jan. 27, but was blocked from traveling after Trump signed his executive order the same day, according to his sister-in-law.

"We've been lobbying a lot of senators in the last few days," said Katty al-Hayek, a doctoral student in Massachusetts with her own pending asylum claim, who met him at the airport.

"It's been a long, stressful story but senators ... were able to get him a waiver from the State Department."

Shahram Javan, 43, of Baltimore, was at Washington's Dulles airport on Sunday afternoon to greet his in-laws, Iranian citizens with U.S. visas that converted to green cards upon entry into the country.

With the visas set to expire at the end of February, Javan feared his in-laws would never make it through as a result of the ban.

Others, like Rana Shamasha, 32, an Iraqi refugee in Lebanon, were not so lucky.

She was due to travel to the United States with her two sisters and mother on Feb. 1 to join relatives in Detroit until their trip was canceled as a result of the travel ban. She was waiting to hear from United Nations officials overseeing their case.

Sharef and his family spent two years obtaining U.S. visas, applying for immigration under a program designed for those who worked for U.S. military and civilian state bodies in Iraq. U.S. Representative Jim Cooper of Tennessee helped clear the hurdles to allow the family to try again, Sharef said.

Standing outside of the arrival terminal at JFK, Sharef said he was unsure what was next for his family as they waited to board their evening flight to Nashville.

"I really don't know what," he said. "I have too many things in my mind right now."