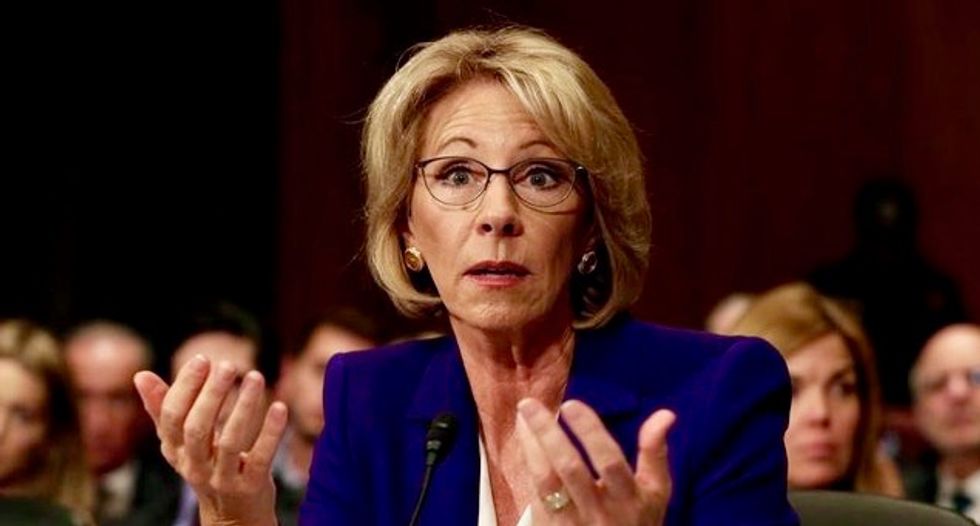 In an ominous sign for Trump, Republican senators Susan Collins and Lisa Murkowski said they would not vote for DeVos, a billionaire philanthropist and charter-school advocate.

Democrats, uniformly opposed to DeVos, are expected to oppose her as a block. They would only need for three Republicans to side with them to make DeVos just the 10th cabinet nominee in U.S. history to be rejected by Congress.

Soon after Collins and Murkowski staked out their opposition to DeVos, the White House said it is confident that she will ultimately be approved.

"I cannot support this nominee," Murkowski said in a floor speech saying she needed to make her intentions clear to her colleagues.

DeVos' nomination barely squeaked through a Senate committee vote on Tuesday, with both Collins and Murkowski saying they voted yes only so the entire Senate could debate the matter.

Trump's early nominations, primarily for security posts, had an easier time on Capitol Hill than names now before the Senate.

Republicans hold majorities in both the Senate and House of Representatives, but Democrats have been on a blitz to try to block the nominations, often raising concerns about conflicts of interest.

On Wednesday, the Senate Finance Committee had to suspend its rules to advance Treasury Secretary nominee Steve Mnuchin and Health Secretary nominee Tom Price to the full chamber for approval, the final step in the confirmation process.

Committee Democrats on Tuesday had boycotted the vote, forcing Republicans to scrap a requirement that at least one Democrat be present for a vote.

Meanwhile, the Senate confirmed Rex Tillerson as secretary of state on Wednesday, filling a key spot on the national security team despite concerns about the former Exxon Mobil Corp chief executive officer's ties to Russia.