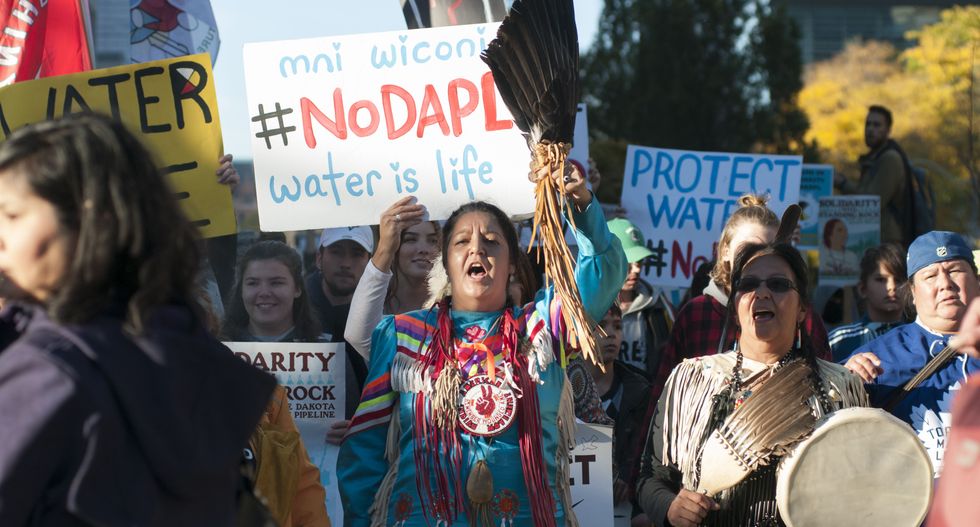 The Standing Rock Sioux chairman on Thursday refuted Sean Spicer’s claim that Donald Trump has been in contact with the tribe regarding the Dakota Access Pipeline, calling the White House press secretary’s assertion “absolutely false.”

Spicer made the claim Wednesday at the White House daily press briefing, hours before militarized police removed the last Standing Rock protestor from camp, after a reporter asked why Trump hasn’t “intervened and tried to initiate” negotiations between” Standing Rock Sioux and Energy Transfer Partners, the company spearheading the project.

“Our team has been involved with both the tribe and the governor there, and so we are not only—we are constantly in touch with them,” Spicer asserted, adding that the Trump administration is confident they will “move forward” with the Dakota Access Pipeline.

“I was on a plane to Washington, D.C. when I learned the easement was issued,” he continued. “It was an insult to me and to the Tribe. I canceled the meeting upon hearing this news. We have since filed a lawsuit for the immoral and illegal issuance of the easement and suspension of the environmental impact study.”

In December 2016, the Obama Administration instructed the U.S. Army Corps of Engineers to deny an easement to Energy Transfer Partners, effectively halting the construction of the pipeline, which the Sioux tribe says threatens the upper Missouri River—the reservation’s main source of water.

The victory for the Sioux tribe was short lived, however. In an executive order signed just days after his inauguration, Trump advanced approval of the Dakota Access pipeline and Keystone XL. Water protectors were told to leave by Feb. 22 or face arrest at the camp. While more than 100 protestors left the camp without resistance, several water protectors stayed behind, facing arrest by a militarized police force.

Despite being forced out of the camp, the Sioux tribe remains committed to fighting against the DAPL, insisting the pipeline “is a dangerous project that threatens our water.”

“The tactics to divide our fight against the real enemy, Energy Transfer Partners, are counterproductive and detract from the goal to stop the denigration of our sovereign rights to protect our treaty resources,” Archambault II said.