'This was thought out': Joe Scarborough shouts down Mika for questioning Trump's diplomatic skills 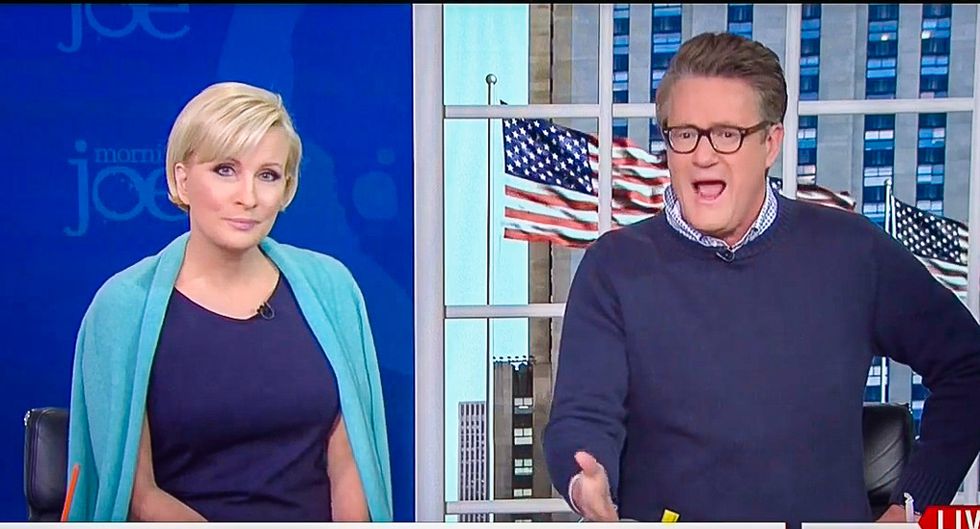 MSNBC host Joe Scarborough angrily rebuked co-host Mika Brzezinski on Thursday after she argued that President Donald Trump had not thought through his threats against Iran.

On Wednesday, National Security Advisor Michael Flynn said that he was "officially putting Iran on notice" over a ballistic missile. The threat came just hours before Secretary of State Rex Tillerson was sworn in. In a tweet early Thursday morning, Trump echoed Flynn, declaring that Iran had been "formally put on notice for firing a ballistic missile."

Brzezinski noted that there was no evidence that Trump vetted his threat with experts in the government before he fired off the tweet.

"There was no review," Brzezinski charged.

"You don't know that," Scarborough snapped back.

"You've been saying for 40 minutes that this was a shot from the hip," Scarborough complained. "I can't prove a negative right here."

"Well, then quit repeating it over and over again!" Scarborough shouted.

"I think we will see over the next several days that this was deliberately planned," Scarborough said. "I could be wrong."

"I hope you're right," the co-host declared.

"Well, we can continue talking about it for the next three hours and you can continue to say they just shot from the hip," Scarborough complained. "I'm saying we don't know. I suspect this was far more planned and far more deliberate and far more thought out and far more strategic than was the [travel ban] executive order."

Richard Haass, president of the Council on Foreign Relations, wondered "if anyone was at the table who said, 'Right direction, wrong implementation, let's first check with Europeans.'"

"Because they weren't sworn in yet!" Brzezinski pointed out.