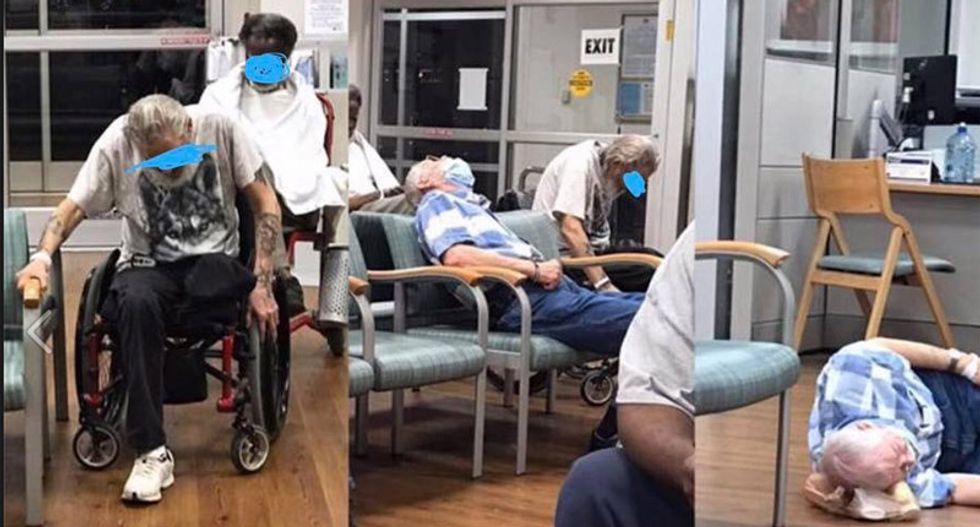 The Durham VA Medical Center is under fire after a visitor took pictures of veterans in their care who were shown slumped over in chairs, with one man crumpled on the floor with no one attending to him.

The shocking photos were posted to the Facebook account of Hanna McMenamin who has since stated that the VA hospital demanded that she take them down.

Writing on Facebook on Saturday, McMenamin explained: "Yesterday (2/24/17) while at the Durham, NC VA Hospital, my husband Stephen McMenamin and I witnessed some very disturbing events. The man in the wheelchair on the left, were waiting in that waiting room at least 3 hours. The man bent over grabbing the chair, was yelling in pain and was borderline convulsing and almost falling out of his chair he was in so much pain. No one paid him any attention until I approached a nurse to please check on him. This gentleman sat in the waiting room in extreme pain for hours upon hours with very little attention paid to him."

According to a post on Tuesday, McMenamin said she has refused to take down the pictures, stating: "My husband and I have been in touch with one of the men in the photographs, and he has given us his blessing to keep pushing on with this and has offered to help us in anyway he can. Thank you Mr. Lee. We will not let the VA sweep this under the rug."

For years, the VA has been harshly criticized for treatment of veterans under its care, with the candid photos now fueling the fire once again.