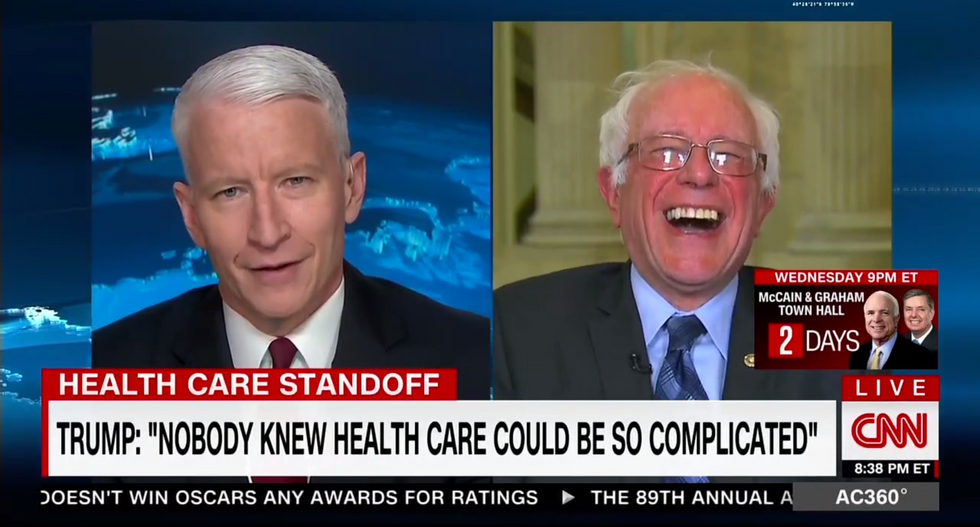 Sen. Bernie Sanders (I-VT) on Monday laughed out loud at Donald Trump’s assertion that “nobody knew healthcare could be so complicated,” noting he personally had “a clue” the issue was a complex one.

Healthcare was a major component of Sanders’ bid for the 2016 Democratic nomination. The Vermont senator is a leading proponent of a single-payer system that guarantees healthcare for all, and has spent decades advocating for access to healthcare as a right, not a privilege.

“Well some of us who were sitting on the health education committee, who went to meeting after meeting after meeting, who heard from dozens of people, who stayed up night after night trying to figure out this thing, year—we got a clue,” Sanders told Anderson Cooper on Monday’s AC 360.

“When you provide health care in a nation of 300 million people, yeah, it is very, very complicated,” he continued. “And maybe now, maybe the president and some of the Republicans understand you can’t go beyond the rhetoric, ‘We’re going or repeal the Affordable Care Act, We’re going to repeal Obamacare and everything will be wonderful,’ a little bit more complicated than that.”

“Let’s get beyond rhetoric,” the senator concluded.