‘We love you’: Trump ‘honors’ Black History Month by having black people shower him with praise 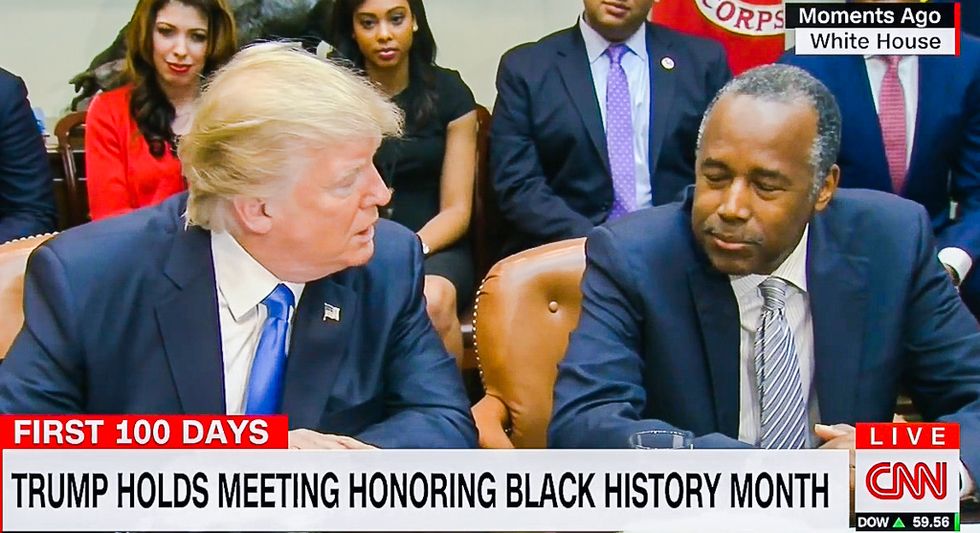 President Donald Trump honored Black History Month on Wednesday by meeting with a number of his African-American supporters, attacking the media and congratulating himself.

"This is Black History Month. So this is our little breakfast, our little get together," Trump announced from White House Cabinet Room. "During this month we honor the tremendous history of the African-Americans throughout our country, throughout the world if you think about it, right? And this story is one of unimaginable sacrifice, hard work, and faith in America."

After noting that his Housing and Urban Development secretary was Ben Carson, the president went on to attack the media for spreading what he what he called "fake news" about the Martin Luther King Jr. bust being removed from the Oval Office.

"The statue is cherished, it's one of the favorite things, and we have some good ones, we have Lincoln and we have Jefferson, we have Dr. Martin Luther King," he continued.

Looking around the table at his black supporters, Trump congratulated himself for his performance in the election.

"If you remember, I wasn't going to do well with the African-American community," he said. "And after they heard me speaking and talking about the inner city and lots of other things. We ended up getting -- I won't go into details but we ended up getting substantially more than other candidates who had run in the past years."

Trump then allowed his supporters an opportunity to praise him.

"So much of the media is opposition party," Trump complained. "Knowingly saying incorrect things. It's a very sad situation. But we seem to be doing well. You know, it's almost like, in the meantime we won. So maybe they don't have the influence they think. They really have to straighten out their act. They're very dishonest people."