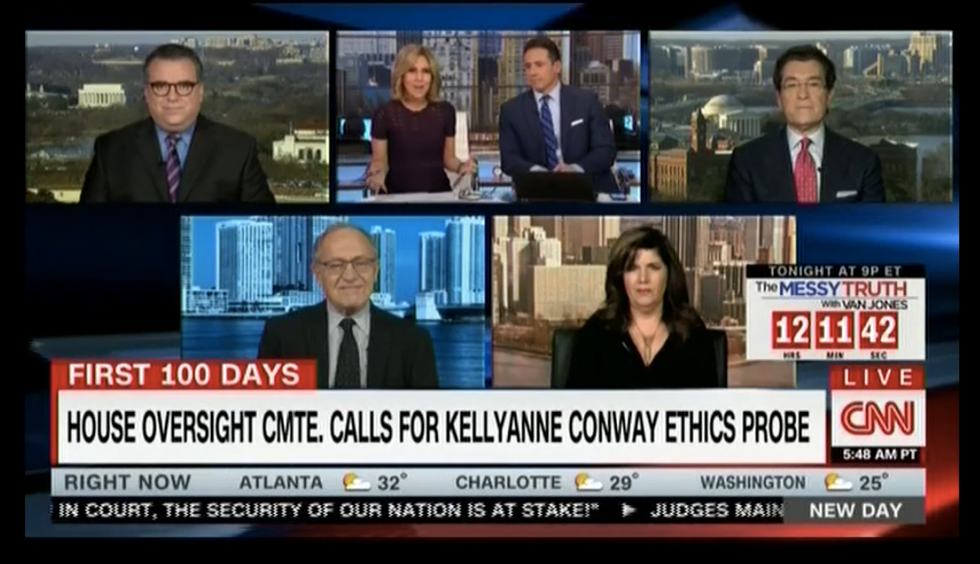 On Friday, a CNN New Day panel was skeptical of the idea that Pres. Donald Trump's senior aide Kellyanne Conway might have been joking when she urged people to rush out and buy apparel from Ivanka Trump's failing fashion line.

"What Kellyanne Conway did, by the letter of the law, was wrong," Zito said. "Having said that, if you watch the clip, it's clear that she's joking. And it's also clear from the way she's answering. She did not, to my estimation, go on there and be, like, 'I am totally plugging her line.'"

She went on, "It appears to be a throw-away line. It's clear that she was joking back and forth."

"As a matter of law, it was a clear violation," said CNN political director David Chalian. "This is a team and an operation that is not running on all cylinders, that has not fully jelled yet, a few weeks into this administration."

Eisen -- a co-founder of Citizens for Responsibility and Ethics in Washington (CREW) -- said, "It is Ethics 101 that you do not get on television and plug a business."

"She was at best half-joking," Eisen said. "Even [Republican Utah Sen.] Jason Chaffetz, who refuses to look at emoluments, even Jason Chaffetz said it was a clear violation."

"Here's why it matters," he explained. "I would agree that if this were an isolated incident, let it go. But it's not. It's part of this enormous Trump effort to capitalize on the presidency, to make millions. And that is wrong. She's just following her boss."

On Saturday, Mediaite reported that Sharon Gustafson, the Trump-appointed general counsel for the Equal Employment Opportunity Commission (EEOC), refused to step down — so the Biden White House fired her.

"Bloomberg Law was first to report Gustafson's firing Friday, and shared the letter she wrote to Biden. She refuses Biden's request that she resign, noting that she was appointed to a four-year term," reported Marisa Sarnoff. "In her letter, Gustafson also accused the EEOC, under Biden, of undermining her work, saying that her reports on 'religious freedom' have been removed from the EEOC website. 'I can only assume that my resignation would be followed by similar suppression of our work promoting religious freedom,' Gustafson wrote."