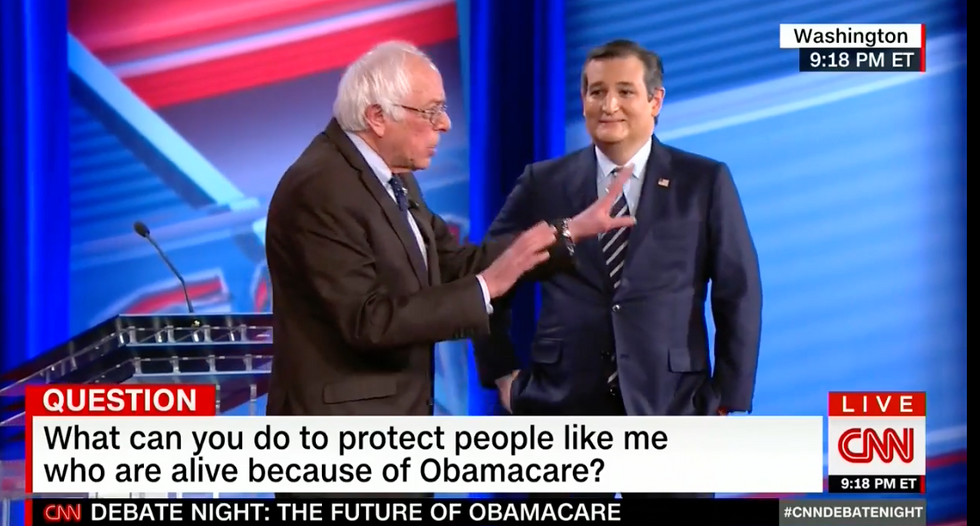 Sen. Bernie Sanders (I-VT) and Sen. Ted Cruz (R-TX) on Tuesday went head-to-head over the repeal of the Affordable Care Act, with the Vermont senator at one point calling out his ideological foe for dancing around a question about pre-existing conditions.

Noting that one of the most “popular parts of Obamacare” is that it offers guaranteed coverage to people with pre-existing conditions, host Dana Bash called on a breast cancer survivor from the audience, who asked Cruz if there was anything he would do to ensure there are provisions in place to protect her if Obamacare is repealed.

Cruz told the woman that every replacement suggestion put forth by Republicans “protect people in [her] situations,” insisting he would include a provision that makes it so insurance companies cannot kick someone off their plan. Notably, however, the Texas Republican said nothing about protecting people with pre-existing conditions who are searching for insurance.

“Ted I cannot believe you just said that,” Sanders said of Cruz’s insistence that he will accept a provision to protect people already on insurance. “It’s a direct contradiction to everything you ran for president on. What Ted has said is he wants to get rid of all federal mandates—every word of Obamacare.”

“The only way we’re going to make sure you are able get the health insurance you need with a pre-existing condition is to make sure that no insurance company in this country can say 'no' to you or anybody else,” Sanders continued. “Now, Ted thinks that’s a terrible government intrusion. I think it is the moral and right thing to do.”

Cruz insisted his response is, “yes: we should repeal every word of Obamacare,” before waxing poetic about healthcare reform that “expands competition,” “empowers patients and keeps healthcare between you and your doctor.”

“It’s easy to say, 'gosh, you’re going to lose your coverage,'” Cruz said, before pivoting away from the question at hand. “What do the Democrats say to the million people who had their health insurance cancelled [under Obamacare?]”

“Ted, you’re a good lawyer and you use words well,” Sanders said mockingly, before pointing out that any provision to protect people with pre-existing conditions “is a government mandate, and a humane mandate.”

Bash then directed Cruz to answer the woman’s specific question.

“I have multiple times, Dana,” Cruz shot back.

“You’re going to make sure that [covering people with pre-existing conditions] is a mandate and a requirement?” Bash pressed.

Cruz once again refused to say that he would insure people with pre-existing conditions, instead promising people who are already on a health insurance plan will maintain “a continuity of coverage.”