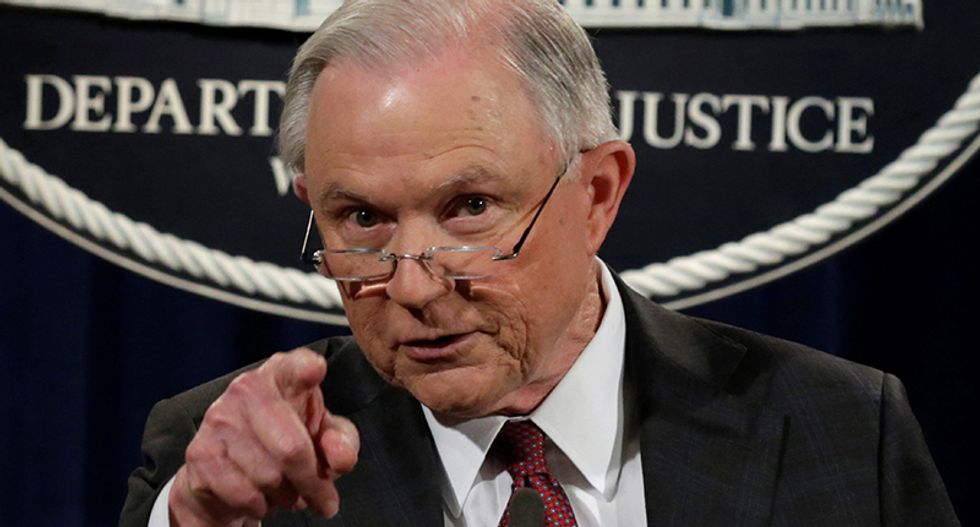 On Hugh Hewitt's show Thursday, Attorney General Jeff Sessions doubled down on his anti-marijuana stance and suggested his department might go after pot businesses with laws designed to take down the mafia.

"I think it’s a more dangerous drug than a lot of people realize. I don’t think we’re going to be a better community if marijuana is sold in every corner grocery store," the attorney general told Hewitt. Hewitt proposed a strategy for the federal government to clamp down on marijuana businesses in states where it's legal: bringing racketeering charges against legal marijuana businesses.

"One RICO prosecution against one marijuana retailer in one state that has so-called legalization ends this façade and this flaunting of the Supremacy Clause. Will you be bringing such a case?" Hewitt asked Sessions. Sessions did not embrace the suggestion—but he didn't rule it out, either.

"We will um ... marijuana is against federal law, and that applies in states where they may have repealed their own anti-marijuana laws," Sessions said in response. "So yes, we will enforce law in an appropriate way nationwide. It’s not possible for the federal government, of course, to take over everything the local police used to do in a state that’s legalized it."

Hewitt then asked the attorney general if his office would make an example of a single pot retailer in order to send a message. "I mean, if you want to send that message, you can send it. Do you think you’re going to send it?" Hewitt asked.

In response, Sessions noted that it would take more than making an example of one business to dismantle the legal pot industry.

"Well, we’ll be evaluating how we want to handle that. I think it’s a little more complicated than one RICO case, I’ve got to tell you. This, places like Colorado, it’s just sprung up a lot of different independent entities that are moving marijuana. And it’s also being moved interstate, not just in the home state," Sessions said.

Sessions has consistently voiced his opposition to legalization. Still, the Attorney General signaled that his department would not depart from the Obama Department of Justice's relatively hands-off approach to marijuana in states where it's legal. As Politico reported, during his confirmation hearings, Sessions reportedly assured pro-legalization Senators that he would not aggressively pursue legal weed.

“He told me he would have some respect for states' right on these things. And so I’ll be very unhappy if the federal government decides to go into Colorado and Washington and all of these places. And that’s not the [what] my interpretation of my conversation with him was. That this wasn’t his intention," said Sen. Rand Paul (R-Ky.). told Politico.

Sessions' interview with Hewitt suggests otherwise. Listen to the audio below.