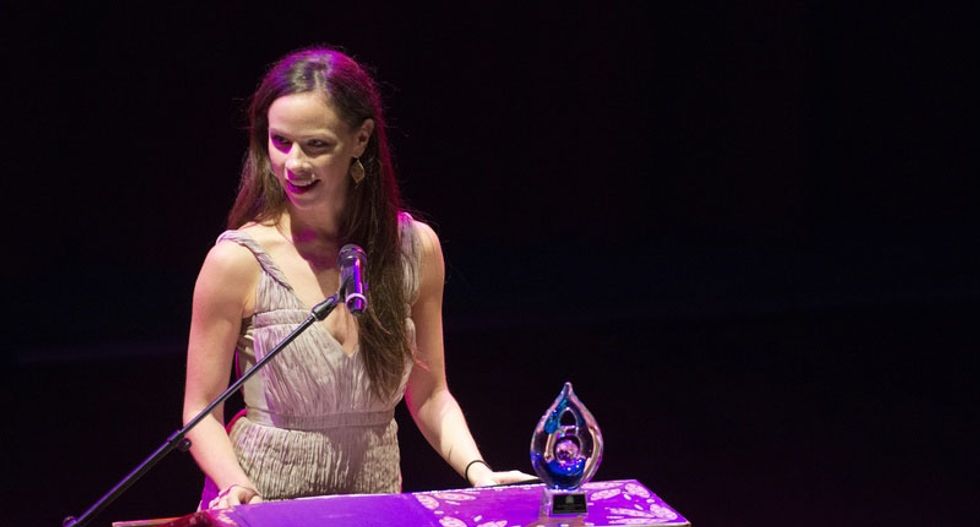 Barbara Pierce Bush speaks at a fundraising lunch on Wednesday in Dallas for Alley's House, which provides mentoring, education and support to teen mothers. (Cooper Neill for The Texas Tribune)

At a Planned Parenthood fundraiser in Fort Worth on Wednesday, Barbara Pierce Bush, the daughter of former President George W. Bush, insisted that the work the organization is doing is especially important after a changing of the guard in Washington.

Bush was the keynote speaker at Planned Parenthood of Greater Texas' annual Fort Worth luncheon. In audio of her speech obtained by The Texas Tribune, Bush hinted that President Donald Trump's electoral victory over Hillary Clinton caught her by surprise.

“In October when I was asked to speak, I said yes and I was thrilled, but I was under the assumption that history was going to go differently,” Bush said to an excited audience of roughly 1,000 people. “That was not meant to be a political statement; I just thought the cards were going to fall in a different way. I’m so happy I said yes because this work could not matter more.”

During her address, Bush said she was inspired to pursue a career in global health issues following a trip to East and Central Africa when she was 21.

“Our belief that health is a human right is not reflected in today’s reality,” she said. “Millions of people's potentials and futures are undermined simply because they do not have access to the health care that they deserve. We have these incredible tools to solve problems, yet health systems are weak, and we need new leaders to fix them.”

Bush also said she was frustrated that people are still having to make a “case for why women’s health matters in 2017.” However, she said she was inspired by the people who came to Wednesday’s event.

Bush's public appearance before the group is striking, given that her father was a staunch abortion opponent during his time as Texas governor and as president. However, Bush’s, mother, former First Lady Laura Bush, has expressed support for the legality of abortion on a handful of occasions.

The younger Bush, the CEO and co-founder of Global Health Corps, called Planned Parenthood an "exceptional organization" in a June New York Times interview and attended a fundraiser for Clinton's presidential campaign in Paris in October.

During Wednesday's event, Bush repeatedly praised Planned Parenthood's work and said the “lessons learned from here are also learned in other countries.”

“To me, Planned Parenthood is a one-stop-shop for everything that has to do with women’s health and all social problems that don’t have to do with women’s health,” said Bush. “I hope you all realize the incredible investment that you’re making for both women and also their kids, their kids' education and their income level. And that is unique and incredible. It’s a silver bullet, if you ask me.”

“It’s our dream that in 20 years we’ll see a dramatic improvement in the health system in terms of quality and affordability of care, and this change will be because of the results of radical new leadership from this generation’s youth,” said Bush.