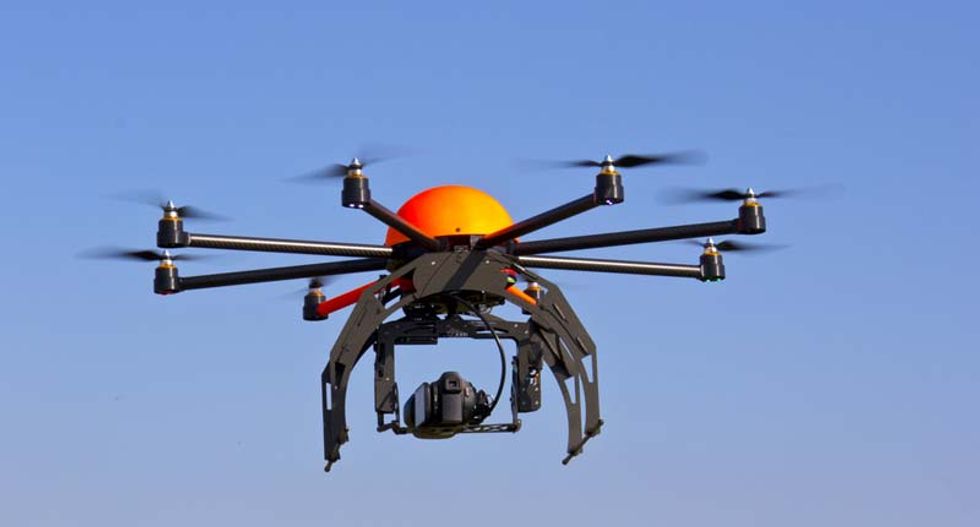 The bill would allow police officers to use drones armed with tear gas, incendiary devices, explosives, and "remote deadly weapons." If the bill is signed, it would go into effect in October, 2017.

In its original form, the bill did not include a provision to allow police to equip drones with arms. Rather, as David McGuire, the Executive Director of the American Civil Liberties Union of Connecticut tells Raw Story, "The underlying bill was strong because it only authorized police to use drones with a warrant for surveillance."

The original bill required officers to obtain a warrant before surveilling individuals suspected of a crime, and would require police to report annually how they used drones. "It protected privacy and free speech rights," said McGuire.

The added provision, McGuire said, "turned a bill that was about protecting peoples' rights into a bill that violates peoples' civil rights by allowing use of force."

State Senator John Kissel told the Associated Press that the committee added the provision "for very limited circumstances." Kissel said, "We can certainly envision some incident on some campus or someplace where someone is a rogue shooter or someone was kidnapped and you try to blow out a tire."

The United States has seen a growing militarization of police forces in recent years. The unrest in Ferguson, Missouri that followed the police killing of Michael Brown in 2014 drew public attention to the 1033 Program — or the National Defense Authorization Act — that allowed the transfer of excess military equipment to civilian law enforcement agencies.

During a Black Lives Matter protest in Dallas in July 2016, police used a robot equipped with a bomb to kill a sniper who had killed five police officers, setting a new and dangerous precedent for policing.

McGuire tells me, "We have been struggling with the issue of militarization of police — this [bill] would be escalating that in a serious and unprecedented way."

"This amendment would send a terrible message to over-policed and victimized communities," McGuire said. He added that the last few years have been spent working to rebuild community trust in law enforcement.

If the bill passes with the added amendment, Connecticut would be the first state in the country allowing police to use drones with lethal weapons. "I think you would see more use of force," said McGuire. But he remains positive that the bill can go back to its original intent.