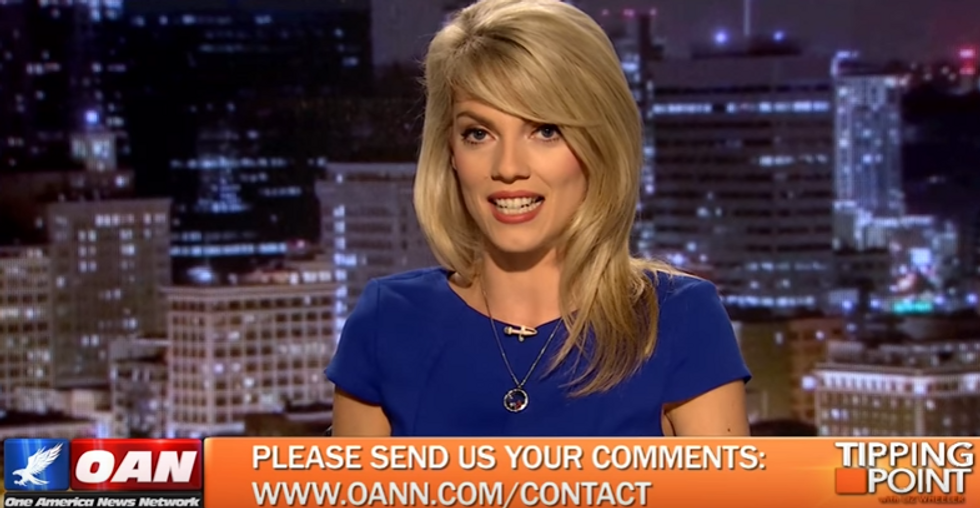 Liz Wheeler, the conservative host of Tipping Point on One America News, has a warning in her Facebook bio: “If you say something stupid, she’ll call you out.” Well, I came across a video where she said a lot of stupid things. So I’d like to return the favor.

You see, Wheeler thinks the females who rallied on International Women’s Day are just a bunch of whiny children who wanted an excuse to miss work.

“Skip work,’ the feminists tell us, to prove how valuable we are in the workplace. Well, I’m valuable because I show up to work everyday,” Wheeler said in her recent ranting Facebook video.

She’s right. What would the American people do without the 68th blonde conservative host who yells at us every day about the disenfranchised political activists she despises? Thanks for showing up to work, Lizzy!

"What are you being denied because of the patriarchy?"

Well, for women who do a similar job as yours at Fox News, it would be a workplace safe from unwanted groping and sexual assault. But please, continue.

“Is there a job you’ve been denied because you’re a girl? If so, that’s illegal and has been since 1963."

While it is illegal to deny jobs based on gender, there’s still a considerable amount of inequality between men and women. Isn’t it strange that more women graduate college than men, yet account for nearly two thirds of minimum wage jobs?

According to the White House Council of Economic Advisers, female graduates began outnumbering men in the mid 1990s. By 2013, women were 21 percent more likely than men to graduate college, and 48 percent more likely to finish graduate school. Yet academic achievement hasn’t translated into better paying jobs for women.

Some like to cite government data showing that women only earn 76 cents for every dollar men make. I concede that statistic skews the reality because it doesn’t compare men and women who do the same job. But there have been numerous studies comparing pay for the same work.

"Has Donald Trump taken rights away from you that you had before he was president? No, he hasn’t. All he’s threatening is your free birth control and you’re acting like hormonal, emotional brats about it.”

Here’s another example of where she doesn’t seem to understand the perspective of anyone outside of her conservative Barbie bubble. Right now the federal government spends $11 billion a year on providing taxpayer-funded health care and support for unintended pregnancies. Creating a system that makes birth control accessible for everyone not only helps women plan for their futures, and lessen the risk of poverty by preventing pregnancy, but it also saves taxpayers money.

Notice how conservatives like Wheeler never complain about the $294 million the Pentagon spent on erectile dysfunction drugs in 2011. But don’t worry, American taxpayers only had to spend $84.24 million in 2014 so dudes across the country could get their dicks wet.

I’m sure Liz is very concerned about Muslim women, especially when she never does any coverage of the issues she briefly listed. She does like to use as them as convenient props to make her bullshit arguments bashing American feminists though. And where’s all her concern for Yazidi girls when Donald Trump and the rest of the right wing is demonizing Muslim refugees?

And just because women in America don’t face violent persecution doesn’t mean things are perfect. We need to fight to protect the freedoms we have, and we still have a Congress full of conservative men who refuse to sign legislation that would protect women from domestic violence. It’s called the Violence Against Women Act. Look it up Liz. You’ll want to know more about it if you ever land that plum job at Fox News you’ve got your eye on.

“You don’t stand up for Christian women, business owners, whose shops shut down because the government didn’t like their religious beliefs."

That’s cute framing, Liz. It’s hard to argue that the government doesn’t coddle religion enough when we give them an estimated $83.5 billion in subsidies every year. But Liz is mad because we don’t let bigot business owners discriminate against gay people. Awww, are you going to be okay my special little snowflake? Does it hurt your feelings that people like you don’t get government protection for being a dick?

Christians in Iran can face imprisonment and even the death penalty. Based on your logic about how women in America have nothing to complain about because they’re not violently persecuted here like they are in the Middle East, shouldn’t American Christians shut the hell up?

“You claim to stand up for women, but you’re not. You’re just pretending to be the victim, demanding special treatment because of some imaginary wrong and your dislike of any woman who disagrees with you.”

Well, Liz is right about one thing: I don’t like her. But it’s not because we disagree on politics. It’s because she’s embarrassing to women, and really bad at her job. Instead of asking questions and following them up with her own unnuanced answers, she could look into the true grievances demonstrators have.

Women who flexed their political muscle on International Women’s Day aren’t victims. They’re the same type of women who won females like Liz the right to vote and the opportunity to share her political opinion on the Fox News version of Nick Jr. If she hates what feminists are fighting for so much, she needs to prove it by rejecting advancements in gender equality. Less political commentary and more sandwiches, Liz.