'Dictator chic': Donald Trump's over-the-top style has a name -- and he's not going to like it 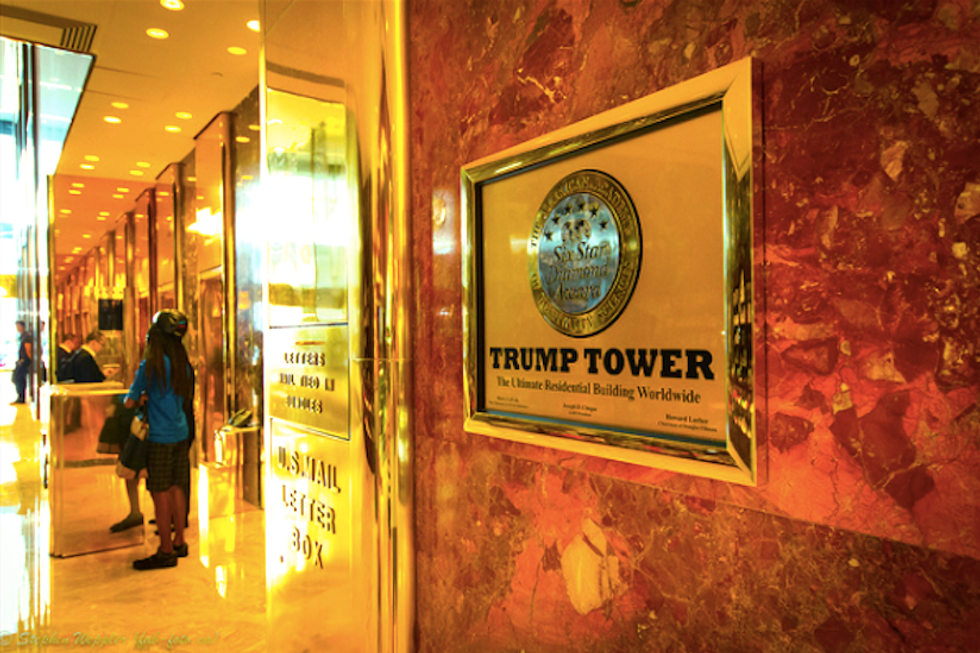 A design expert says that anyone who is bewildered by the origins of Pres. Donald Trump's over-the-top, gold-plated aesthetic need look no further than the palaces of Saddam Hussein, Muammar Gaddafi and the Philippines' Ferdinand and Imelda Marcos.

"Dictator style" is what journalist and author Peter York dubbed Trump's glittering, gold everywhere, marble-and-frescoes interior design aesthetic in an essay for Politico on Sunday, writing that Trump's residence in Trump Tower is exactly the sort of place in which ruthless dictators around the world like to ensconce themselves.

"Trump’s design aesthetic is fascinatingly out of line with America’s past and present," York said. "If you doubt it, note that the interiors of the apartments his company actually sells bear no resemblance to the one he lives in. But that doesn’t mean his taste comes from nowhere. At one level, it’s aspirational, meant to project the wealth so many citizens can only dream of. But it also has important parallels—not with Italian Renaissance or French baroque, where its flourishes come from, but with something more recent. The best aesthetic descriptor of Trump’s look, I’d argue, is dictator style."

In 2007, York published the book "Dictator Style: Lifestyles of the World's Most Colorful Despots," in which he examined "what makes dictators’ houses so recognizably similar."

"I ended up with 16 case studies -- strongmen from Mexico’s Porfirio Díaz to Serbia’s Slobodan Milosevic -- and most of them, I concluded, obeyed 10 defining 'dictator chic' rules," he said.

Among them are "Go big" like former Romanian dictator Nicolae Ceausescu and his wife Elena, who "started building what was to become one of the largest government buildings in the world. They called it the 'People’s Palace,' and they knocked down a good chunk of old Bucharest to make room for it."

Sadly, the Ceausescus were overthrown and executed before it was completed. It still stands mostly empty today.

Other rules include "Repro," which means reproduce styles and great works of art from other eras, particularly French historical styles, but never use actual antiques. Make new things designed to look old, York said, if you want to keep up with the other authoritarians.

"The English decorator Nicky Haslam has dubbed this style 'Louis the Hotel,'" York said, "ever crisp and shiny."

“'If I’ve only got one life,' most dictators seem to think," York said, “'let me live it surrounded by gold.' When you have all of your country’s resources at your disposal, why not? Gold furniture, gold wall decorations, columns with gold capitals, gold taps. Bright gold, fake gold, shiny alloys for functional metalwork. Viktor Yanukovych, the recently deposed pro-Russian leader of Ukraine, lived in a positive blizzard of gold, which was revealed to a waiting world when he was ousted in the country’s 2014 revolution."

When it comes to art and ornamentation, dictators like symbols of power.

"There’s a whole range of accessories that dictators are particularly fond of: heroic beasts, wildly macho creatures like lions and eagles, the stuff of legends and heraldry rendered in precious metals, with jeweled eyes, looking quite steroidally aggressive," York wrote. "Heroic beasts symbolize one’s own bare-chested alpha-ness, the ability to wrestle a bear to the ground."

"There is no subtlety or understatement, let alone irony," York said.

After his book came out, York was deluged with photos of every dictator's residence that was discovered as their empires collapsed. In 2015, though, he came across a set of unlabeled photos that he didn't recognize.

"They appeared to show a gigantic apartment in what looked, from the windows, very much like New York. But I know Manhattan and its sophisticated style pretty well, and at first glance, you would think the place didn’t belong to an American but to a Russian oligarch, or possibly a Saudi prince with a second home in the United States," he said.

"There were overscaled rooms, and obviously incorrect-looking historical detailing and proportions. The home had lots of gilded French furniture and the strange impersonal look of a hotel lobby, with chairs and sofas placed uncomfortably far from one another. There were masses of gold; there were the usual huge chandeliers, branded relics of famous sportsmen like Muhammad Ali, and mushroom-colored marble floors. There was relatively little in the way of paintings, but otherwise, the place reeked of dictator chic," he said.

That residence turned out to be Donald Trump's Trump Tower penthouse, decorated by "Henry Conversano, who designed extensively—and perhaps unsurprisingly—for casinos. No matter how you looked at it, the main thing this apartment said was, 'I am tremendously rich and unthinkably powerful.' This was the visual language of public, not private, space. It was the language of the Eastern European and Middle Eastern nouveau riche."

The Trump Tower penthouse, York said, "projects a kind of power that bypasses all the boring checks and balances of collaboration and mutual responsibility and first-among-equals. It is about a single dominant personality."

"The Trump look is miles from the architectural tradition of Washington, D.C., a city kept deliberately low-rise in its center, and whose neoclassical public buildings evoke stability and trustworthiness through their restraint. From the White House to the monuments, the American capital was designed to avoid Europe’s autocratic excesses, projecting a message of simplicity, democracy and egalitarianism—precisely the opposite of the new brand in town," he concluded.