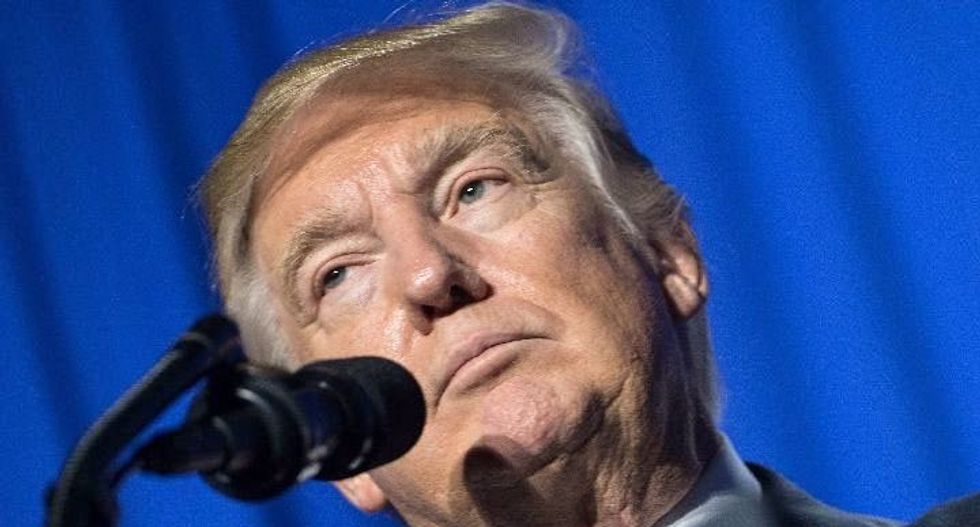 When the U.S. military invaded Iraq 14 years ago, in March 2003, it ignited a rebellion with its incompetent and harsh rule. Its response was to dub the resistance “anti-Iraqi forces.” It was a brazen bit of propaganda, even by Pentagon standards.

A heavily armed force of more than 100,000 soldiers from halfway across the world with no religious, cultural, or linguistic ties to a country it had illegally occupied was calling people defending their homeland anti-Iraqi forces.

The target of the propaganda was not the Iraqi people. They frequently expressed more support for attacks by overwhelmingly Iraqi guerrilla groups on American forces than support for the U.S. occupation. The target was Americans, many of whom willingly swallowed the absurdity that the Iraqi resistance, and not the Americans, were “foreigners, outside agitators, viruses newly burrowed into Iraq's body politic,” as one pundit put it.

This nugget of history is newly relevant. It is key to understanding how Donald Trump is bringing the “war on terror” home. Like the tumultuous Iraq occupation, Trump is weaponizing chaos. His goals are similar, too—consolidating autocratic rule and radically reshaping society.

This strategy is evident in Trump’s America-First worldview: Every threat is foreign and everything foreign is a threat, whether undocumented immigrants, radical Islamic Terrorism, steel, industry, missiles, drugs, or “bad ones.” They are all that stands in the way of “A new chapter of American greatness.”

His method is simple, which is what makes him so dangerous. Like U.S. generals in Iraq who defined who was a real Iraqi or not, based on their subservience to the occupation, Trump splits the nation into real Americans and those who are threats.

Few can forget when Trump joined the race in June 2015 he bashed Mexican immigrants as drug dealers, rapists, and criminals. But few remember he also said, “They’re not sending you. They’re not sending you.” The two-sided message portrayed Mexicans as an alien threat to America and erased centuries of Mexican-American and Chicano history central to the American experience.

Same with other groups. Trump blames undocumented immigrants for “the American family that loses their jobs, their income, or their loved one.” Without extreme vetting, a “beachhead of terrorists [will] form inside of America,” and the nation will “become a sanctuary for extremists.” He conflates a vision of hellish inner cities with African-Americans and Latinos. “Our inner cities are a disaster. You get shot walking to the store, they have no education, no jobs.”

Trump is redefining these Americans as anti-American forces. They are an imminent danger, responsible for every social ill, and a disease that must be eradicated.

Like Pentagon war propaganda aimed at the home front, when Trump says “I will do more for African-American and Latinos than [Clinton] can do in 10 lifetimes,” he is not speaking to these groups. He is speaking to his white-supremacist base. (That some minorities support Trump does not negate his nativism as it is still his guiding ideology.)

When Trump says foreigners are “poisoning our youth” with drugs, he makes them out to be an existential threat. As such, no policy is too extreme, whether it’s mass deportations, torture, Muslim bans, or extinguishing “lawless savages … from our planet.” Police, border agents, and the military must be unshackled and set loose. And the tsunami of scandals has not deterred the Trump White House from pushing forward.

On day five in office, Trump signed executive orders that criminalize 11 million undocumented immigrants, making all of them a priority for deportation. He then widened the scope of immigration raids and empowered border agents to be more aggressive, such that they are now reportedly “looking really hard for reasons to deny, instead of reasons to admit” foreign visitors. He proposed lower standards for immigration police, potentially unleashing “rogue elements.” Jeff Sessions’ Department of Justice has vowed to pull back on consent decree with police departments, in effect endorsing police brutality. Trump plans to increase private detention facilities for asylum-seekers to 20,000 beds and has issued a new Muslim ban. He is ratcheting up tensions with Iran, escalating the brutal U.S.-Saudi war on Yemen, and demanding a $54 billion increase in military spending.

These moves, along with attacks on civil society, comprise a plan to divide America along sectarian lines of race, religion, and politics as the Pentagon did in Iraq. But it’s not just what he is doing; it’s how he does it. Trump has a “year zero” approach to governance, like the U.S. Coalition Provisional Authority in Iraq.

Trump wants to wipe history clean, creating a regime of chaos. Stephen Bannon, his chief strategist, says as much: “It’s going to get worse” and “every day it is going to be a fight [for the] deconstruction of the administrative state.” Emboldening frontline police, border agents, and soldiers is Trump’s version of shock and awe. He is sowing fear and chaos and circumventing traditional chains of command. It’s similar to how he uses social media and conspiratorial news to win followers by bypassing and disorienting experts, media, and opinion-makers.

It is disorder by design, even if a specific act like the first version of the Muslim ban backfired. As shambolic as the Trump White House is, his state of constant meltdown benefits him. The more outrageous a falsehood the better, whether claiming more than 3 million illegal ballots cost him the popular vote or that Obama wiretapped his phones during the election. When opponents castigate Trump for a “destructive” act that “discredits our democracy” they miss the point. He wields lies and chaos as a battering ram against anything in his way: the press, civil liberties, the judiciary, federal agencies, science, basic reality.

Trump is turning government powers and liberal values of tolerance and neutrality against government and liberal democracy. His lies are reported as fact, just as Pentagon propaganda that anti-Iraqi forces were trying to undermine American-led progress toward a safer, secure, rebuilt, and democratic Iraq was treated as news.

The difference between Trump and the occupation of Iraq is the latter was so remote, the lies were harder to unmask and seemed less consequential to most Americans. But no matter how obvious Trump’s lies, institutions like Congress, the FBI, and the media take them seriously because their power derives from accepting the legitimacy of the system, particularly the presidency. Their dilemma is if they state what is factually obvious, that Trump is lying, they play into his hands by appearing to be knee-jerk partisans.

In a state of chaos, “might makes right” is the only arbiter of social order. And no one wields more might than the Trump White House, head of the most powerful institution in human history. In Iraq, the chaos sparked uprisings that imperiled but never ousted the occupation because the United States provoked sectarian tensions that exploded into civil war.

There is little danger of America descending into a Hobbesian war of all-against-all as in Iraq, but that’s not for lack of trying. As Trump’s ideas trickle down, they curdle into rhetorical violence. At rallies, Trump supporters describe undocumented immigrants as parasites, mosquitoes, and flies, Black Lives Matter as violent, Islam as an ideology, and Arabs as ISIS members.

It’s a small step from there to actual violence as evidenced by the burst of hate-group activity since Trump entered the race in 2015. The number of hate groups in America is nearing an all-time high, anti-Muslim hate groups tripled in 2016, and nearly 1,100 bias attacks were recorded in the month after his election. Most ominous, violence motivated by his demagoguery—bomb threats, arsons, shootings, and now murders—appears to be spreading.

Trump’s response is to ignore or deny the hate he has spawned, while demonizing petty vandalism by leftists. A Department of Homeland Security report obtained by The Intercept describes window smashing at anti-Trump protests in Portland, Oregon, and Washington, D.C, as “domestic terrorist violence.” Republicans in 18 states have followed suit by introducing legislation to add new criminal sanctions to nonviolent protest.

Trump and the right are using the chaos they have instigated to broaden their attacks and consolidate their power. It’s like how the U.S. occupation created the conditions for Al Qaeda and ISIS to take root in Iraq, and then point to the blowback as reason for it to continue the war.

Demagoguery is not subtle. It is emotion-driven scapegoating that requires a constant stream of enemies. Trump will retain the upper hand as long as the chaos he creates dominates the political process. His need for enemies and his penchant for bombast could trigger a hot war in the Middle East or with North Korea.

But Trump and the forces behind him are not invulnerable. The Pentagon outmaneuvered the Iraqi resistance by playing one side against another and provoking them to alienate supporters with destructive tactics. The lesson is to build a unified resistance that defends all of those directly targeted by Trump: Muslims, refugees, undocumented immigrants, and transgendered people for starters. It also needs to have a vision of what it stands for, beyond mere opposition.

Organized mass disruption is how dictators fall, and Trump can be defeated through nonviolent walkouts, strikes, blockades, sit-ins, and boycotts as long as they retain popular support and legitimacy. But if the movement becomes divided against itself, that will play to Trump’s advantage. America will inch closer to a failed state and society. Like Iraq.