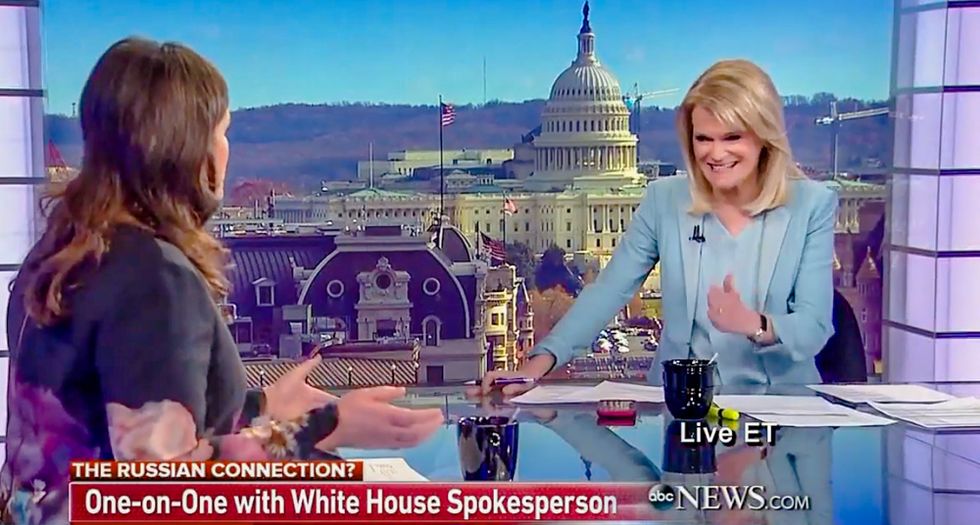 White House Deputy Press Secretary Sarah Huckabee Sanders on Sunday defended President Donald Trump's assertion that former President Barack Obama ordered a wiretap of Trump's phones -- but she provided no evidence to back up the claim.

During an interview on ABC News, host Martha Raddatz pointed out that Trump had insisted that it was a "fact" that his phones had been monitored by the former president without offering proof.

"The New York Times, the BBC have also talked about and reported on the potential of this having had happened," Sanders said. "All we're saying is let's take a closer look. Let's look into this. If this happened, if this is accurate, this is the biggest overreach."

"I think he is going off information he's seen that has led him to believe that this is a very real potential," Sanders insisted. "The American people have a right to know if this took place."

"The president believes it is true?" Raddatz pressed after again explaining that Trump had called the wiretapping claim a "fact."

"His tweet speaks for itself," Sanders demurred. "He's talking about, could this have happened?"

"He's saying -- once again, he said it did happen," Raddatz repeated.

"All we're asking is we get the same level of look into the Obama administration and the potential that they had for a complete abuse of power that they've been claiming that we've done over the last six months," Sanders opined. "And time and time again, there's no evidence or wrongdoing. The FBI says this is B.S. Yes, you guys continue to hammer and hammer of some false idea and false narrative that there's something there when, frankly, there just isn't."

"I just want to say, Donald Trump started this on Saturday morning," the ABC host quipped.

Watch the video below from ABC News, broadcast March 5, 2017.