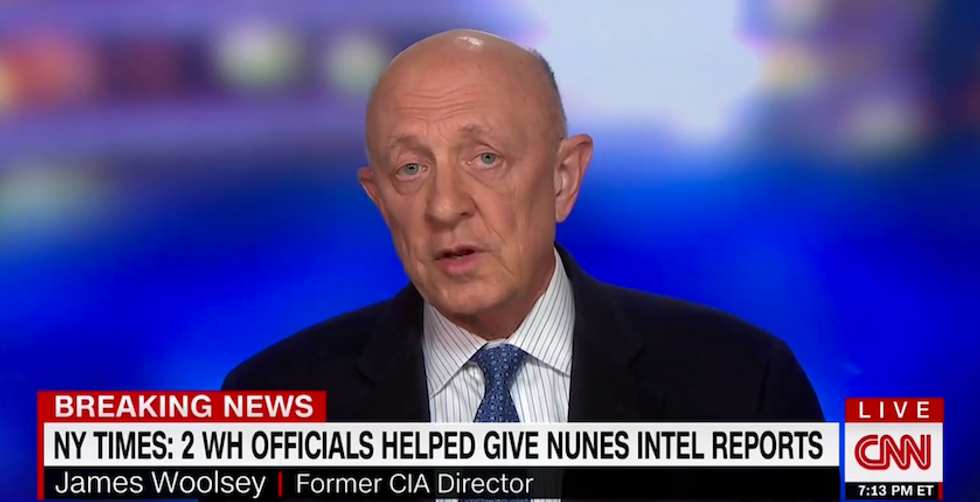 CNN's Erin Burnett invited a panel to her OutFront segment on Thursday night to discuss the new information surrounding House Intelligence Committee Chairman Devin Nunes (R-CA) that was released on Thursday by the New York Times. The report reveals that Nunes may have received intelligence information from the White House itself.

As panelists discussed Nunes' sources and the possible collusion between him and the White House, former CIA Director Jim Woolsey said, "I think we're looking largely at the wrong issue."

"What we're looking at is government by tweet and how does this all work and who knew what when — it doesn't matter much at all," he argued. "What matters is what kicked this all off, which is whether the Russians were interfering in our election."

Woolsey continued, explaining that "if they tried, they didn't succeed in affecting the outcome of the election," however, their success in 2016 doesn't mean they won't try again in the future.

"The Russians have a program called 'disinformation,' otherwise known as lying, and they try to affect the outcome of lots of states ... What's new is doing this with cyber —" Woolsey continued before Burnett cut in.

"But also to be fair, I think they haven't come to a conclusion as to the impact on the election," Burnett said, before also asking if "it is true that Devin Nunes — that the White House was coordinating with him, or colluding with him, or giving him information that backed up the president's tweet about being wiretapped and not giving it to anyone else, how big of a problem is that?"

"It's kind of politically interesting," said Woolsey. "But it's nowhere near the problem that the Russians could cause in our next election by doing their planned hacking and putting malware into our voting machines, and so forth over the course of the next period of time before the next election."

He continued, "There's a real danger here, because 25 percent, approximately, of our voting machines in the United States do not have paper backups, so if the electronics have been tampered with, you will never know, and you can't do a recount."

"We've got to get that fixed," he said. "The rest is very minor by comparison." He later noted, "The ability of our country to run a fair electoral system is not just another ancillary issue. It's the heart of having a republic."