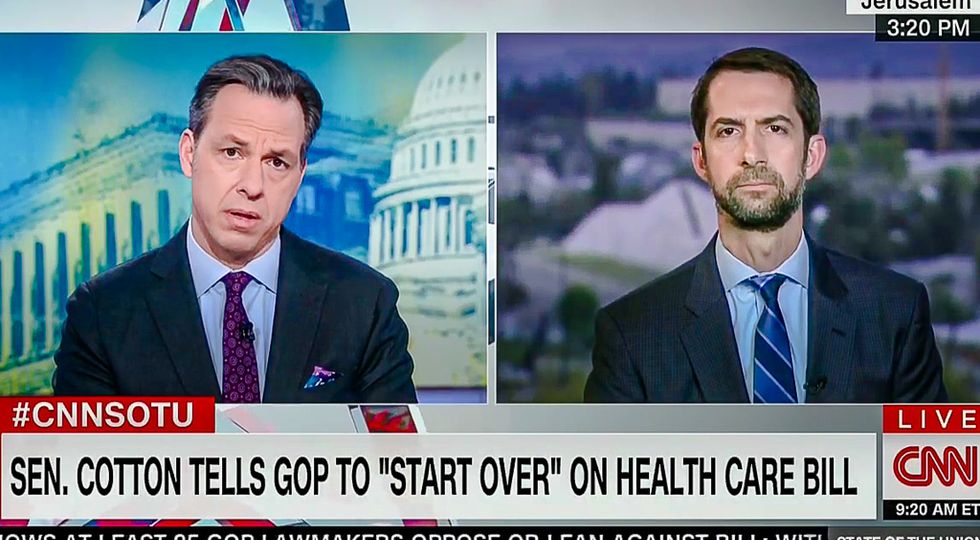 Sen. Tom Cotton (R-AR) on Sunday called on "able-bodied" poor people to be removed from Medicaid.

CNN host Jake Tapper noted during an interview on State of the Union that Republican governors had criticized House Speaker Paul Ryan's (R-WI) plan to repeal Obamacare because it would reduce funds for Medicaid, leaving millions without medical coverage.

"They are saying, by removing the Medicaid expansion that happened during Obamacare, that helped provide insurance to 250,000 Arkansans, this replacement is going to take it away," Tapper explained. "Does that concern you?"

Cotton declared that many people on Medicaid should be purchasing their own insurance instead.

"Medicaid is a welfare program," he said. "It's primarily designed for the indigent, elderly, the disabled, the blind and children."

"It's not designed for able-bodied adults," Cotton continued. "We want to get those people off of Medicaid, into a job and into market-based insurance."

The Arkansas Republican argued that Ryan's health care bill needed to do a better job bringing down premiums so that poor people could afford to buy insurance.

"I want to assure that the private market is working for them so they can afford insurance and get off Medicaid," he concluded.