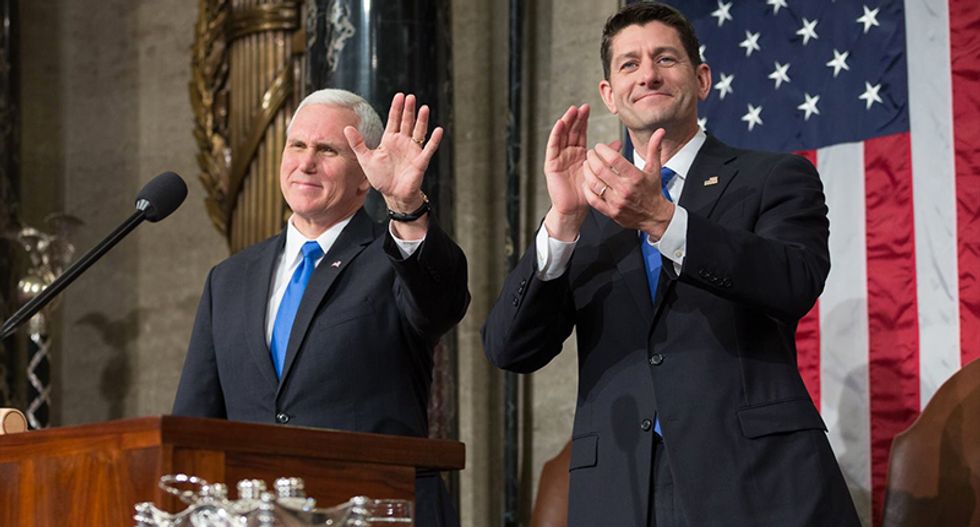 There are two major laws that Congress is working to pass that would make it more difficult for an American to sue a corporation, The Consumerist reported.

H.R. 985, the Fairness in Class Action Litigation Act is akin to an Erin Brockovich killer. The first of the two laws, would make it more difficult for American's to file class action lawsuits against a corporation, the Center for American Progress explains. The law would put restrictions on the criteria for people banding together for a class action suit. It also would complicate and delay any payments for an attorney representing the clients. Such an act would make it risky for any lawyer to take on a case to help someone hurt by a corporation. According to CAP, Vice President Mike Pence has been seeking laws like this for years.

If you've seen the film "Erin Brockovich" you know that she brought together residents of Hinkley, California to sue Pacific Gas and Electric for contaminating groundwater that caused medical problems and in some cases death. This law would have prevented Brockovich, or any American, from coming together to file a lawsuit against any company.

H.R. 720 the Lawsuit Abuse Reduction Act would require federal judges penalize or otherwise discipline any attorney that brings what they consider to be a "frivolous lawsuit." Currently, this decision is left up to the judge’s discretion.

A better name for the bill might be "Who Cares About Hot Coffee" bill. In 1992, a 72-year-old woman sued McDonald's when she spilled a cup of coffee in her lap and sustained third-degree burns and required skin grafts. Her suit is often used as the perfect example of a frivolous lawsuit, but the documentary "Hot Coffee" explains that the elderly woman did actually suffer from severe burns and was hospitalized as a result. While the woman sued, she never asked for $3 million in damages. She awarded it by a jury. The judge in the case decided the lawsuit wasn't frivolous. McDonald's had over 700 lawsuits for hot coffee that caused, in many cases, third-degree burns. In her case refused to give her more than $800 to pay her medical bills. At the time she first sued, she was only asking $11,000 in medical bills but they refused. The judge recommended a mediation hearing and at that hearing, she asked $300,000 and the mediator suggested $225,000. McDonald's again refused to award anything. A jury in the case awarded her $200,000 for her injuries, but cut it to $160,000 because she bore 20 percent of the responsibility. It was the jury that awarded her $2.7 million in punitive damages, in part, to send a message to McDonald's. The judge lowered it to $640,000 and she ultimately ended up with under $600,000 in damages.

From Republican language, one would think there's an outbreak of frivolous lawsuits breaking out all over the country. Any judge can dismiss a lawsuit as frivolous already. If a suit goes to a jury trial, it's because a judge already considers it a valid lawsuit. Our judicial system has three safeguards in place already, but the GOP is seeking to attack lawyers for helping people exercise their right to have their day in court, however short that day may be.

According to Legal NewsLine, this isn't the first time the law was proposed. Rep. Lamar Smith (R-Texas) proposed it in 2015 and it passed the House but failed to garner traction in the Senate.

“Frivolous lawsuits have become too common," Smith said in 2015. "Lawyers who bring these cases have everything to gain and nothing to lose under current rules, which permit plaintiffs’ lawyers to file frivolous suits, no matter how absurd the claims, without any penalty. Meanwhile, defendants are often faced with years of litigation and substantial attorneys’ fees."

A corporate defendant likely believes any lawsuit would be considered frivolous.

Democrats are fighting back, however. Sen. Al Franken (D-MN) has proposed his own bill, The Arbitration Fairness Act. Often times, contracts include clauses that force any employee or customer to enter into a binding arbitration instead of lawsuit. Franken's law would clarify a "century-old Federal Arbitration Act — a law that was never intended to apply to things like cell phone bills, personal checking accounts, or Snuggies," The Consumerist explained. No company could force any customer or employee from using the judicial system with their binding arbitration clause.

One of the most notable cases about binding arbitration was when Jamie Leigh Jones sued the defense contractor KBR after she was drugged and gang-raped while working overseas. Jones alleged KBR imprisoned her "in a shipping container after she reported the rape, and suggested KBR had tampered with some of the medical evidence that had been collected at an Army hospital," Mother Jones reported. Jones never saw the inside of a courtroom thanks to KBR's binding arbitration in her contract. Franken's law would ensure anyone like Jones would have his or her Sixth Amendment rights upheld.