'He was in business with the cartoon caricature of corruption': Maddow breaks down Trump-Azerbaijan report 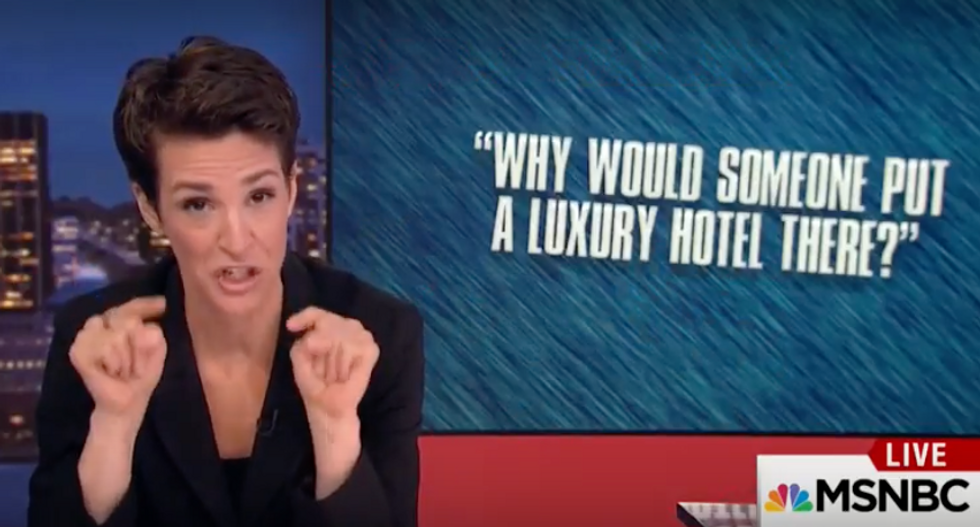 MSNBC’s Rachel Maddow on Monday began her program with a rundown of the bombshell report linking Donald Trump to corrupt Azerbaijani oligarchs and an Iranian military group, explaining, “there is a reason we should expect this White House to do everything in his power to keep secret his finances and his business dealings.”

The report, published by The New Yorker, examined a Trump-backed hotel in Azerbaijan that appears to be a corrupt operation.

Maddow traced a contract between the small country of Azerbaijan, a “former soviet state run by a dictator," to a failed Trump Organization building project in Azerbaijan. She explained the history of Azerbaijan’s relationship with Bechtel, a U.S.-based infrastructure company that in 2007 lost out on a bid to build roads in the former Soviet state. She noted the public learned about Bechtel’s failed bid from a website that made significant waves in the 2016 presidential election: the transparency organization, WikiLeaks.

“Before WikiLeaks got all inextricably bound up in our new national nightmare about Russia hacking our presidential election … back when WikiLeaks was instead just wholesale dumping U.S. State Department cables into the public domain, one of the things we learned was actually about a funny thing that happened to this giant company, Bechtel,” Maddow began.

She explained that Azerbaijan’s oil wealth “resulted in them doing a lot of building,” including “show off-y buildings.” The country’s transport minister Ziya Mammadov met with the Senior Vice President of the Bechtel Corporation, Charles Redman, in 2007, eventually declining to work with Bechtel because the rates were “quite expensive.” The country instead went with a company that cost three times as much as Bechtel.

Maddow said the New Yorker piece offers the “next major line of inquiry into our new president,” and provides one of the “best explanations we have had yet about why the White House is so dramatically freaked out about the prospect that there might be an independent investigation into the president and his contacts.”

The MSNBC host explained that the company that landed Azerbaijan’s road contract “is a company that is believed to be controlled by Iran’s Revolutionary Guard"—an Iranian military organization that preserves “internal order" in the country and “wages war on behalf of Iranian interests.” As Maddow pointed out, Iran’s Revolutionary Guard is a “supporter of international terrorist movements” and “deeply sanctioned by the U.S. government.”

She explained that it’s often “awkward, hard” and “illegal” for companies that sponsor terrorists “to move money around,” adding it’s important that monetary transactions “appear to be legitimate business transactions.”

Maddow then turned to the never-opened Trump International Hotel & Tower Baku, a planned building in Azerbaijan that “on the surface makes no financial sense.” The hotel was planned miles away from any other major luxury hotel, with no access to the Caspian Sea.

“It really just doesn't make sense on the surface,” Maddow repeated, later asking “why was this built, how could this ever make financial sense?”

The MSNBC host explained the Trump family “abandoned this project” a month after Trump’s election, but “not before [Trump] received millions of dollars in that deal”—a deal forged between Trump and billionaire transport minister Mammadov (the same Mammadov that helped the Iranian Revolutionary Guard launder money to terrorist organizations).

Maddow said while U.S. companies are free to do business with any company in the world, they are not free to conduct business if funds originate from companies tied to terrorism. “You have to know,” Maddow explained. “Looking the other way is not a defense.”

“You are expected to do your due diligence,” she added.

“Trump and his family were in business with the cartoon caricature of corruption,” Maddow said of the president's ties to Azerbaijan's Mammadov. The host pointed out, “It is a violation of U.S. law” to do business with a company that helps fund terrorism.

“There is a reason we should expect this White House to do everything in his power to keep secret his finances and his business dealings,” she said.