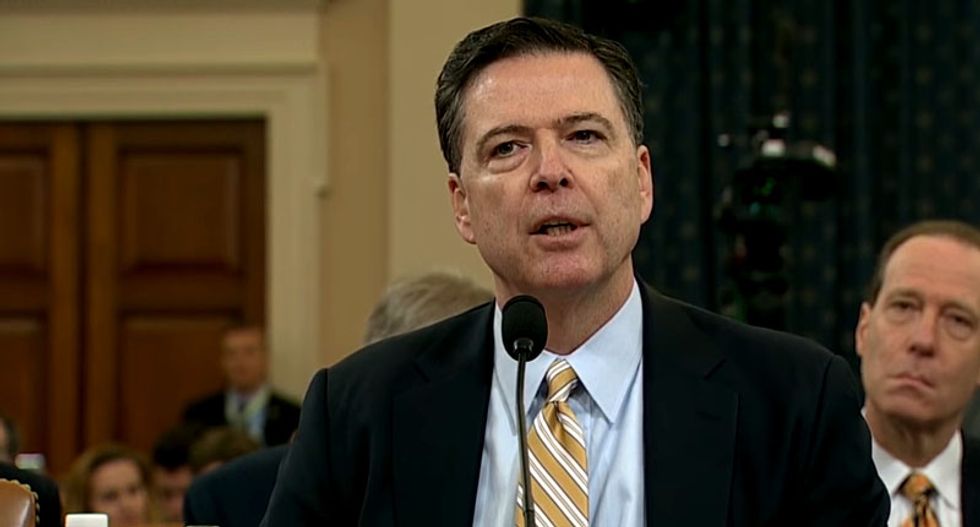 On Oct. 28, 2016, four months after declining to bring a case against former Democratic candidate Hillary Clinton for her use of an unsecured e-mail server during her time as secretary of state, FBI director James Comey wrote a stunning letter to members of Congress, informing the legislative branch that the bureau was reviewing new documents pertinent to that investigation.

On Nov. 7, 2016—one day before the 2016 presidential election—the FBI director announced the bureau found nothing new in those documents. The following day Donald Trump, Clinton’s rival throughout the campaign, was elected president.

The circumstances surrounding Trump’s election cannot be singularly attributed to Comey’s re-upped revelation of an FBI probe into Clinton’s emails. But one thing is certain: when voters went to the polls on Election Day, they did so under the false narrative that only one of the candidates had been the subject of a criminal investigation. In fact, in July 2016, around the same time that Comey originally declined to bring charges against Clinton, the FBI began investigating the Trump campaign’s connection to Russian operatives actively trying to influence the U.S. election.

According to a WhoWhatWhy exposé, published Thursday on AlterNet, the FBI declined to inform the U.S. public about ties between Trump and the Russian government for fear of exposing informants and “[jeopardizing] a long-running, ultra-sensitive operation targeting mobsters tied to Russian President Vladimir Putin — and to Trump.”

A two month-long investigation by the publication revealed that FBI agents likely feared exposing an ongoing operation against “an organized crime network headquartered in the former Soviet Union.” This Russian mob “is one of the Bureau’s top priorities,” spans several decades, and is intricately linked with associates of Trump and businesses the president owns.

As the report notes, federal officials were intent on protecting an FBI source—a convicted criminal with deep links to the organized crime network—upon whom the bureau came to rely for information. Some federal officials “were so involved in protecting this source” they later became a part of his personal defense counsel; upon his conviction government attorneys urged for “extreme leniency” toward this man.

The article further reveals that among the many details Comey was unable to discuss during his Mar. 20 testimony to Congress was the fact that “for more than three decades the FBI has had Trump Tower in its sights,” monitoring its occupants' deep ties to organized crime networks. According to the report, one former Trump Organization adviser, Felix Sater, fits the bill for the FBI’s source into the Russia-based crime ring.

Sater, a Russian-born real estate developer, is a convicted felon; in 1998, he was charged in a massive $40 million stock fraud scheme involving members of the Genovese and Bonanno families. According to the Miami Herald, shortly thereafter, Sater “began spying for the CIA” and a “was able to track down a dozen Stinger missiles equipped with powerful tracking devices on the black market.” In return for buying the missiles, Sater avoided jail time. According to WhoWhatWhy, separate legal filings on Sater’s behalf indicate “he ‘reported daily’ to the FBI for many years.”

Sater later altered his public name to Satter and became a senior adviser for Bayrock Group LLC, a real-estate development company based in New York. Through his work with Bayrock, Sater worked on Trump SoHo, and was a senior advisor to Donald Trump and The Trump Organization beginning in 2006.

In 2009, Sater was formally sentenced in the racketeering case, and was asked to pay a $25,000 fine with no prison time. The Herald notes that Sater also avoided paying the victims of his scheme, which given the scope of his conviction, is “mandatory under federal law.”

Much of Sater’s background was sealed, preventing fellow investors and clients from learning about his criminal past. Civil lawsuits brought against Bayrock charge the company with “concealing Sater’s 1998 $40 million federal racketeering conviction, and subsequent 2009 sentencing.” As investors sought to reveal Sater’s criminal background, federal agents argued that exposing it would undermine national security. As the Herald reports, at one hearing, the judge presiding the case said it had made it to the top levels “of a national law enforcement security agency. I should say agencies—plural.” The judge also dubbed Sater “John Doe” to “protect the life of the person.”

Fred Oberlander, an attorney who represented a former Bayrock employee suing the company in civil court, was provided access to highly sensitive documents involving Sater’s work as a government informant. According to WhoWhatWhy, on Feb. 10, 2012, the US Court of Appeals instructed Oberlander he could not “inform the legislative branch of the United States government what he knew about” Sater.

Oberlander’s attorney Richard Lerner, in a statement to WhoWhatWhy, said his client being forbidden from speaking with Congress “may well be the first and only hyper-injunction in American history.”

“If there are others who have been scared silent by judges who wish to nullify Congressional and public oversight, we may never know,” Lerner added. “That is frightening.”