'If he's not joking': Sean Spicer loses it when NBC reporter asks 'when can we trust the president?' 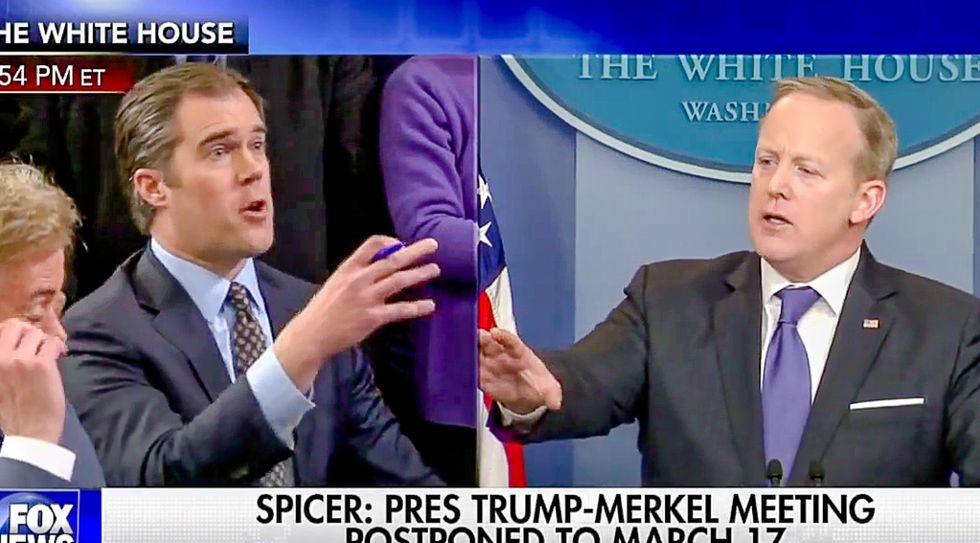 NBC News correspondent Peter Alexander got an earful from White House Press Secretary Sean Spicer on Monday after he asked when it was appropriate for media to take President Donald Trump at his word.

"You said, 'They may have been phony in the past but it's very real now,'" Alexander said, quoting Spicer's words back to him. "When should Americans trust the president? Should they trust the president, is it phony or real when he says President Obama was wiretapped?"

"He doesn't really think that President Obama went up and tapped his phone personally," Spicer explained. "But there's no question that the Obama administration, that there were actions about surveillance and other activities that occurred in the 2016 election. That is a widely reported activity that occurred back then."

"The president used the word wiretapping," the press secretary continued, gesturing air quotes, "to mean, broadly, surveillance and other activities during that."

Alexander turned to Congressional Budget Office (CBO) estimates on the impacts of health care reform, which have been attacked by the White House.

"I guess the question is when can we trust the president, when he says something is phony or when he says it's real?" the reporter wondered.

"You asked a question about CBO and now you're conflating [it] with a question of the president," Spicer complained.

"The question in simple terms is, when he says something, can we trust that it's real?" Alexander said again. "Or should we assume that it's phony?"

"Trust that it's real!" Spicer insisted.

"How can we believe that it's real when you just told us that's it's phony?" Alexander shot back.

"I did not tell you that," Spicer said.

"You told us on Friday that the president said that the [unemployment] numbers were phony then but they're very real now," Alexander observed.

"I think the difference is the president was talking then and now about job creation," Spicer snapped. "The number of jobs. The issue that he brought up in the quote that you're talking about was the percentage of people unemployed. And there is no question that no matter how you look at this, whether you talk about 4.7 or 4.8 [percent] or whatever the number is, that number fluctuates by how people calculate who's in the workforce."

"The bottom line is the percentage of people who are unemployed varies widely by who you're asking and the way you do the analysis of who's actually in the workforce," the press secretary continued. "The number of people in the workforce who are working and are receiving a paycheck is a number that we can look at. Secondly, when you're asking about the validity of the CBO report, again, I'll refer you to the CBO itself. The number that they issue that would be insured in 2016 was 26 million people... The actual number is 10.4."

Alexander replied: "The bottom line is the question is still not answered. Can you say affirmatively that whenever the president says something, we can trust it to be real?"

"If he's not joking!" Spicer exclaimed.